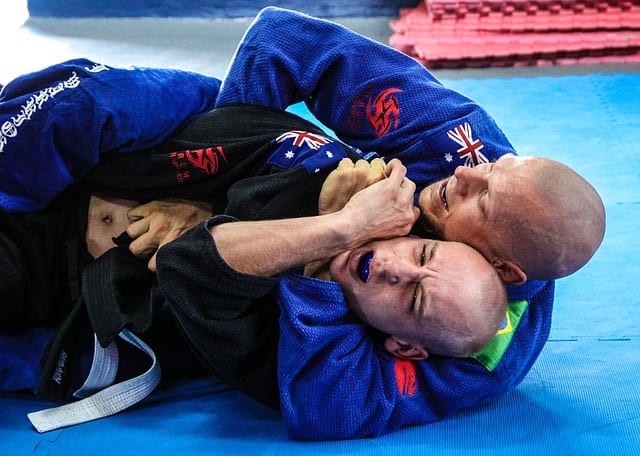 With Jiu Jitsu continuing to explode in popularity it has become even more easy to find a place to train. No matter where you are in the world or what city, there is probably a BJJ school to train at.

But among these jiu jitsu schools, there are a special few that stand out from the rest. These academies are where the world’s best Jiu Jitsu athletes train.

After a two year layoff from competition, multiple time world champion Xande Ribeiro returned with a huge announcement. With his return to competition, Xande announced he would be opening his very own Jiu Jitsu school academy and affiliation. Six Blades BJJ in Austin, Texas.

It seems odd to start a top 10 best BJJ schools list with a brand new gym. Although if you know anything about Xande Ribeiro no one will argue with us about this pick.

Xande has been one of the best BJJ athletes and coaches of the last 20 years. He and his brother Saulo built the phenomenal affiliation Ribeiro BJJ and now Xande is looking to create another team.

This team led by Xande already has the potential to be among the world’s best schools. You won’t want to miss a great opportunity to train under a world champion.

You can find out more about Six Blades here : https://sixbladesbjj.com/

Checkmat BJJ under the leadership of Ricardo and Leo Vieira have become quite the powerhouse since its creation in 2008. After being highly decorated competitors, the Vieira brothers opened their own affiliation to share their BJJ with the world.

These brothers are highly respected instructors that have innovated Jiu Jitsu with their phenomenal style and technique. Their method has been proven very effective and Checkmat rarely goes a year without a student becoming world champion.

Among their students are some of the best BJJ athletes in the world. Including Lucas Leite, Michelle Nicolini , Marcus “Buchecha” Almeida. Nicolini and Almeida are even considered by many the best athletes ever in their divisions.

This Jiu Jitsu school is definitely worth checking out if you find yourself in Long Beach, CA.

Since retiring from competition, Roger Gracie now makes his home in London, England and opened his very own BJJ school. Roger Gracie Academy.

Gracie is one of the best and most respected grapplers ever. He dominated the sport Jiu Jitsu scene for over a decade. Winning multiple world champions in almost every year that he competed, except for one.

His style is old school classic Jiu Jitsu that focuses on basic techniques and heavy pressure. Roger believes old school is the best school and he has proven it many times in competition.

Since retiring, he has also become a great instructor and you should definitely train with him whenever you’re in London. https://rogergracie.com

Led by Juilo Cesar Pereira, GFTeam has produced some of the best grapplers in the world. Champions like Rodolfo Vieira and Ricardo Evangelista grinded for years in the scorching heat of Rio de Janeiro.

The main GFTeam Jiu Jitsu school is located in the barra of Meier, which is where training camp for Worlds takes place. But honestly, you can find world class training at any of the affiliate schools within the city.

There can be over 50 people on the mat at a 10am class at an affiliate like GFTeam Merck. Full of world class grapplers that live and breathe Jiu Jitsu. https://www.facebook.com/gfteamoficial/

Now this pick at number 6 is more for historical purposes than being one of the best Jiu Jitsu schools. With Gracie Jiu Jitsu opening up shop in Torrance, CA, BJJ may not have exploded like it did.

As practitioners of Jiu Jitsu, we have to give credit and respect to the Gracie family for spreading BJJ. The Gracie school in Torrance was one of the very first Jiu Jitsu schools in the US. Founded by Rorion Gracie, they arguably started the first Jiu Jitsu boom in popularity outside of Brazil.

Today the school is run by Rener and Ryron Gracie and they are still teaching classic Gracie Jiu Jitsu. During a trip to LA, you should definitely consider taking a trip to Gracie HQ in Torrance and pay respects. https://www.gracieuniversity.com/

Up in the great white north of Canada lies one of the best Jiu Jitsu schools in the world. Head coach Firas Zahabi is a mastermind and one of the most respected minds in martial arts.

He is most known coaching elite MMA fighters like Georges St Pierre and Rory MacDonald. But he is also without a doubt one of the best Jiu Jitsu coaches in the world.

Zahabi is a blackbelt under John Danaher and thousands of fighters and grapplers travel to Tristar to train with him. Going to Montreal to train with Firas would do wonders for your BJJ game and how you approach the art. https://www.tristargym.com/

Marcelo Garcia is considered by many to be the GOAT in Jiu Jitsu. How he beat athletes double or triple his size with seemingly effortless technique was amazing to watch.

Now since retiring from competition, he opened up his very own Jiu Jitsu school in the heart of NYC. Once he first opened his doors, Marcelo was swarmed with students wanting to train under. He now has thousands of students training under him and thousands of others that travel there every year.

People that go there glow about the positive atmosphere that Marcelo created. Not only is he considered a Jiu Jitsu GOAT, but Garcia is also considered the nicest person in BJJ

At Marcelo Gracie Jiu Jitsu, you’re going to get world class Jiu Jitsu in the fantastic atmosphere. You can’t ask for much more than that. https://marcelogarciajj.com/mgjj/

In the southern suburb of Houston, Texas lies Gracie Barra Texas. GB Texas is run by Vinicius “Draculino” Magalhaes. Draculino has over 4 decades in Jiu Jitsu and created a powerhouse of a gym in Houston which is regarded as one of the elite Jiu Jitsu schools.

Under the coaching of Draculino, he has promoted over 100 students to black belts. Many of which have won major championships in BJJ. Magalhães is one of the most decorated coaches in BJJ with numerous world championship athletes who train under him.

If you ever make the trip to his school in Houston his classes are packed with students. Also on any given day you could be training with multiple world champions. Professor Draculino is one of the most respected instructors in the world and you can learn so much from him. https://graciebarratx.com/

Number two on our list is none other than Andre Galvao’s Atos Jiu Jitsu school in San Diego, California. Galvao himself is one of the greatest competitors of all time and becoming one of the world’s best coaches.

San Diego is a city full of world class Jiu Jitsu, but Atos arguably stands as the city’s best. Not only the city, but is arguably the best Jiu Jitsu school in the world.

There are literally too many world champions to name that have come out of Atos in the last decade. They have made their mark as one of the strongest jiu jitsu schools in the world and for many years to come. https://atosbjjonline.com/

Coming in at #1 on our top 10 best Jiu Jitsu schools in the world list is Renzo Gracie Academy. Renzo has one of the most storied careers in BJJ and MMA. But arguably the greatest thing he has ever done was open his very own Jiu Jitsu school.

Renzo’s school is so packed with world class instructors and talent that there are different fight teams within the school. Which brings us to one of the reasons why we gave Renzo the top spot. The Danaher Death Squad.

In the basement of Renzo’s is where the Danaher Death Squad trains led by mastermind John Danaher. Under the leadership of Danaher, DDS have become the best squad of Jiu Jitsu athletes in the world. Including reigning ADCC double champ Gordon Ryan considered by many the current best in the world.

Being loaded with so much talent, Renzo’s academy in NYC was the clear choice for the world’s best jiu jitsu school. https://renzogracieacademy.com/

Check out this video of Firas Zahabi talking about the best jiu jitsu schools in the world with Joe Rogan: