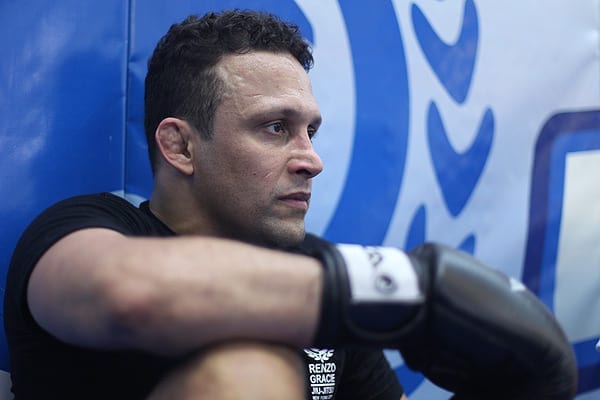 Renzo Gracie is from the royal family of Jiu Jitsu and grew up learning the family trade in Rio de Janeiro. From the time he could walk and probably before, Renzo was on the mat practicing Jiu Jitsu.

Everyday he was on the mat with dad Robson Gracie learning the family martial arts. When he was in his 20s is when he started competing seriously in Jiu Jitsu and Vale Tudo. An early version of MMA with no gloves and no rules.

Renzo Gracie has competed on and off in MMA for the last 30 years. Starting out fighting in no holds barred Vale Tudo matches in Brazil and also various BJJ competitions.

He made his Vale Tudo debut in 1992 against a Muay Thai kickboxer named Luiz Alvareda. Dominating the kickboxer with his Jiu Jitsu and submitting him with an RNC within 7 minutes.

Renzo would go 9-0 in his first 11 fights before losing his first fight at the Japanese promotion Rings. Throughout the next 20 years, Renzo would sporadically compete in MMA and is now semi retired.

While Renzo competed in MMA, he would also be one of the top Jiu Jitsu competitors in the world. Specifically in No-Gi submission grappling.

He would compete in every ADCC from 1998 to 2011 winning the championship twice in 1998 and again in 2000. One of only a few grapplers that have one multiple ADCC world championships.

All while Renzo Gracie was competing, he was also making a living coaching Jiu Jitsu and later MMA. He trained nearly all of his relatives for their fights from his brothers Ralph, Ryan, and cousins Rodrigo, and Royce.

Renzo moved to the US in the early 90s to coach at his relatives’ schools, while he also trained for fights. Gracie was gradually building what would become one of the biggest chain of BJJ schools in the world.

In the late 90s, Renzo Gracie set up his Jiu Jitsu academy, Renzo Gracie Academy in the heart of Manhattan, New York. He would soon start attracting numerous students that would become the world’s best fighters, BJJ competitors, and coaches.

When the UFC began exploding in popularity many of the top fighters in the world were training with Renzo. He has had numerous UFC champions train at his academy from GSP, Matt Serra, Chris Weidman, and Frankie Edgar.

Renzo has also helped train numerous BJJ world champions at his academy. Just about every year since the gym opened, there has been a world champion that came from Renzo’s school.

Maybe the most enduring part of Renzo’s legacy is that he has produced some of the world’s best coaches. The big three being John Danaher, Ricardo Almeida, and Tom DeBlass.

The master of the Danaher Death Squad that formerly coached in the famous blue basement at Renzo’s. He has helped train numerous MMA and BJJ world champions in his coaching career.

John and Renzo helped lead Matt Serra to a world title and then became GSP’s personal BJJ coach. His eye for detail and creating strategies helped GSP have one of the most successful reigns in UFC history.

What he is most known for today is being the mastermind behind the Danaher Death Squad. An elite group of grapplers that have taken over professional Jiu Jitsu. Blending Danaher’s signature leg lock system with wrestling and precision passing.

After winning in BJJ, Renzo then helped DeBlass train for MMA. Earning a 9-2 record and having a stint in both the UFC and Bellator.

DeBlass, then retired for the first time and opened his own Jiu Jitsu in his home state of New Jersey. He was the first coach of Garry Tonon and Gordon Ryan before they began dominating the Jiu Jitsu scene. Tom has continued to run his successful BJJ school and is highly respected in both the MMA and Jiu Jitsu communities.

Another one of Renzo’s students that had successful fighting careers and became great coaches is Ricardo Almeida. Ricardo is a 4th degree black belt under Renzo and has numerous successful academies around the US east coast.

He has one 2 BJJ world championships and had a 4 year stint in the UFC before retiring. As coach, Ricardo has trained 2 UFC world champions in Frankie Edgar and Eddie Alvarez, and also coaches Corey Anderson.

Renzo Gracie’s legacy far exceeds just being a successful fighter and MMA coach. He has been one of the best representatives ever for BJJ and MMA.

Along with being a successful coach and fighter, Renzo Gracie is also a best selling author. He has written 2 BJJ instructional books that detail techniques, as well as his philosophies and theories on Jiu Jitsu.

Throughout the world, there are numerous Renzo Gracie Academy affiliate schools that teach his style of Jiu Jitsu. Numerous black belts that have trained and learned under Renzo that continue to represent BJJ with pride and respect. Just like their master Renzo does everyday.

Renzo is known for a montra he commonly refers to as “fodacy.” It’s a portugese word that roughly translates to” f*** it.” Gracie has lived by this mantra of doing things his way and always keeping his composure to succeed.