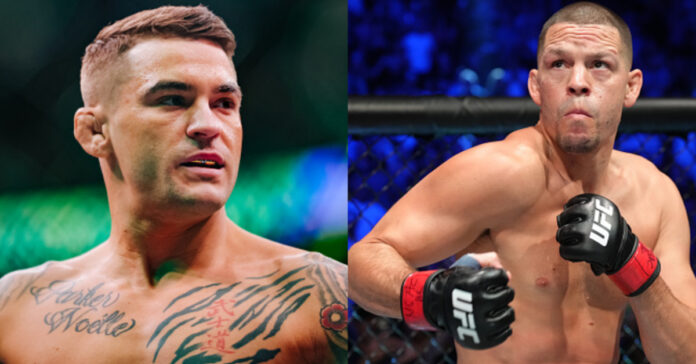 Dustin Poirier was nearly injected into the UFC 279 main event with Nate Diaz after his original opponent Khamzat Chimaev stepped on the scale massively overweight for the welterweight affair.

Scrambling to find a replacement, UFC President Dana White and the company played through many scenarios. One that nearly came to fruition was Dustin Poirier stepping in to face Diaz in what would have been an exciting match-up between two iconic strikers. As we all know by now, that fight never occurred as the promotion opted to shuffle around the pre-existing card and deliver fans an equally exciting main event between Diaz and ‘El Cucuy’ Tony Ferguson.

In an interview with ‘The Heavy‘ on YouTube, Dustin Poirier confirmed that he was contacted about stepping into the main event on short notice. ‘The Diamond’ revealed that he had accepted the fight and worked out all the details to get to Vegas, but in the end, the UFC went another direction.

“It [phone call with UFC] was good. It was surprising,” Poirier told Heavy Sports. “My coach Mike Brown just flew into Louisiana the night before, and it was his birthday. So, I ate some pasta, so I was a little bit heavy the morning they called. Then they offered me the fight and I accepted it. They had to go through hurdles with the athletic commission to try to make this thing happen, for me to fly over same day.”

“Luckily for me, I have some friends who have the ability to — and pilots — get me to Vegas on very short-notice time, so I had that set up. Everything was good to go. But I think it ultimately came down to the athletic commission,” Poirier continued. “Tony had already weighed in and they wanted to go that way instead. But I did accept, and I did speak to the UFC, and they were very thankful.”

Even though things didn’t work out for Dustin Poirier at UFC 279, fans won’t have to wait long to see ‘The Diamond’ back in the Octagon. The former lightweight title challenger is scheduled to face fellow striker ‘Iron’ Michael Chandler as part of the stacked UFC 281 lineup on November 12th.

The last time we saw Poirier inside the cage, it was against former UFC lightweight world champion Charles ‘Do Bronx’ Oliveira at UFC 269 last December. ‘The Diamond’ fell short in his title bid, losing via third-round submission. Before that, Poirier had won three straight including back-to-back victories over Conor McGregor.

For Michael Chandler, he will have the opportunity to win back-to-back fights for the first time since signing with the promotion in 2020. Chandler stormed into the UFC with a first-round knockout of Dan Hooker at UFC UFC 257 but would go on to drop two straight against Charles Oliveira and Justin Gaethje. Chandler got back into the win column with a second-round knockout of Tony Ferguson at UFC 274.