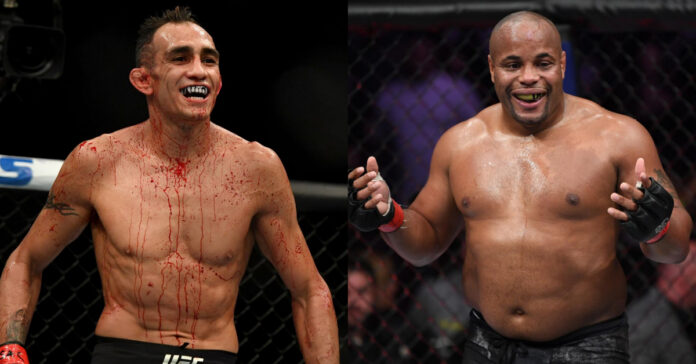 Tony Ferguson slammed Daniel Cormier for suggesting he step away from fighting.

This past Saturday, Ferguson took on Nate Diaz on a day’s notice at UFC 279 after Chimaev missed the welterweight limit for his headlining bout with Diaz. Ferguson dropped his fifth straight outing when he lost to Diaz by submission, leading “DC” to comment that he was done.

In an interview with Brett Okamoto of ESPN, “El Cucuy” fired back at Cormier for stating that it was time for him to retire.

“When I feel like I’m ready to retire, I will retire,” Ferguson said via MMA Junkie. “But right now it’s a little bit different, a little bit more interesting. DC and all these commentators that just keep repeating the same sh*t in the past couple of years – because that’s what they want me to do. They want the public eye to see me like that and they want to see me as a quitter and so on and so forth.“

Ferguson brought up the infamous ‘towel gate’ incident when Cormier appeared to hold onto a towel to make weight.

“I never cheated to get on the scales to retain my championship like DC – hashtag ‘towel gate,’ – these guys grabbing the towel, trying to lift some pounds off the scale. The UFC (was) right there – they went with it. It’s like an inside job. This guy wants to call it out, I’m going to call you right back out. You don’t have to be an asshole to the people who actually work hard. There’s a lot of up-and-coming fighters that see that sh*t and they’re going to try and go with the clique – and that’s it. So don’t start that sh*t.

“I’ve literally given my shirt off my back to the fans, and same thing with the UFC, and I’ll still take my shirt off to go inside that f*cking octagon and show that I’m the f*cking man. I’m still the f*cking champ.”