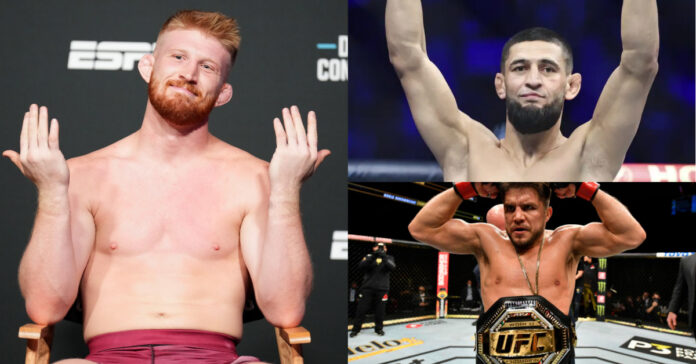 Henry Cejudo has backed Bo Nickal to out grapple Khamzat Chimaev in a potential bout.

Nickal is coming off a dominant win over Donovan Beard at this past Tuesday’s Dana White Contender’s Series. He came out firing from the get-go in his second appearance in the show and secured another finish in under a minute without taking any damage.

The victory finally earned him a UFC contract from president Dana White, who only had the following words on his notes while watching the fight, “god damn.”

During his post-fight interview, Nickal called out the top-ranked welterweight contender Chimaev for a bout. The hyped prospect has many believing he will wreak havoc in the promotion, and former UFC two-division champion Henry Cejudo agrees.

“Bo Nickal says, ‘I want the Swedish princess, I want the guy that didn’t make weight. That’s the guy that I want.’ I just hope he shows up. It just shows his confidence,” Cejudo said (ht MMA Junkie). “Chimaev thinks he’s good in wrestling – his wrestling is nowhere near Bo Nickal, I can tell you that. “He can take down these UFC guys that have never wrestled. Try taking Bo Nickal down, and 100 percent I can see Bo Nickal easily taking down Khamzat Chimaev.”

Cejudo believes Nickal will surely be a champion

Cejudo is confident in what he has seen from Nickal so far and believes he will surely become a champion at 185-pounds.

“For those who don’t think Bo Nickal is the real deal, I’m going to tell you guys right now, as an Olympic champ, as a two-division champion, I don’t even wanna say prospect no more, I think it’s just pinning whenever this guy actually becomes champion at 185 pounds,” Cejudo said. “I think if you’re able to put him against Israel Adesanya now, just according to styles, Bo Nickal beats him. He puts him to his back, controls his wrists, grapples the heck out of him, and that’s all she wrote.”