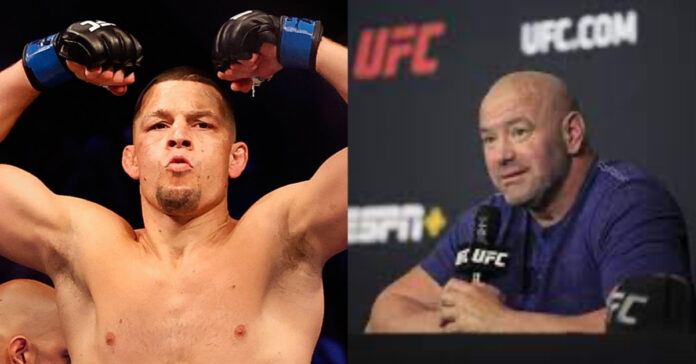 Nate Diaz shares a backstage conversation he had with Dana White after his submission victory over Tony Ferguson at UFC 279.

Diaz’s relationship with the UFC was rocky heading into his final bout at UFC 279. He was asking for everyone on the roster, and it took so long for him to find an opponent. The UFC finally booked him against Khamzat Chimaev, but due to unforeseen circumstances, Diaz took on Ferguson instead. Chimaev missed weight by 8.5 pounds and forced the UFC to do some last minute adjustments to the PPV card.

Diaz is one of the biggest stars in the MMA world, due to his “eff you” attitude that he brings to every fight. His bout against Ferguson was just another example of that attitude. He was constantly joking around the entire fight, and turned his back to Ferguson multiple times.

“Congrats. Good luck with everything, man. This is always your f*cking house. If you need anything, whatever you need, it’s your house kid.” White told Diaz after his victory.

It is currently no known what Diaz will be doing in the future when it come to fighting. As of now, he is starting his own fighting promotion. The promotion name is “Real Fight Inc.”, and will host boxing, jiu-jitsu, and, MMA bouts. Diaz is currently getting his promoting license, to put these fights on.

Diaz has also gotten calls from BKFC, who are interested in putting together a fight against Mike Perry. Diaz has also been in back and forth with Jake Paul multiple times, so that could always be a possibility as well. One thing for sure, is that the UFC will most likely bring back Diaz for his trilogy bout against Conor McGregor. There is too much money on the table for all parties, to not want to do that fight one last time.