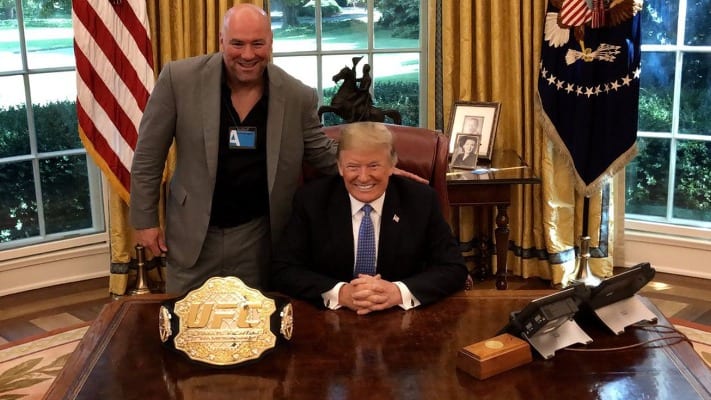 Donald Trump held a presidential campaign event in Nevada and amongst the big crowd were several UFC personalities. This included, UFC President Dana White and a handful of his fighters were in attendance to show support for the US President. The group included UFC Lightweight Interim Champion Justin Gaethje, former double-champ Henry Cejudo and long-time Trump fan Colby Covington.

Trump showed the highest praise to White in front of the large crowd, calling him “so smart, so tough, so cunning,” as well as boasting about how he helped the UFC in its early days.

“I gave (Dana White) a place a long time ago,” Trump said about letting UFC use his venue. “All I know, is just like we have outside, we had lines. I was like ‘what the hell is going on here, Dana? This place is packed!’ We were packed, we had thousands of people.

“He’s an incredible guy, and he also loves his fighters. He wants to take care of his fighters, and he brought some of them, among the best.”

Trump also made sure to give praise to the fighters present during his speech by saying they have “a lot of muscles” and “a lot of genius.”

Cejudo and Gaethje happily took photos and videos of themselves sitting next to White from the front row of the campaign event. In these social media videos, the former two-division champion Cejudo was loud and proud with his support as he repeatedly exclaimed “Trump Nation” whilst sat next to Gaethje and their manager Ali Abdelaziz.

White and the UFC’s vocal support for Trump’s re-election hasn’t gone unnoticed. Subsequently, the US President returned the favour by praising the organisation to his masses and promoting the UFC’s upcoming events.

The President stepped in front of the camera to shoot a backstage video with Covington to promote the upcoming Coving fight with Tyron Woodley this weekend.

What do you think about the UFC supporting Donald Trump?