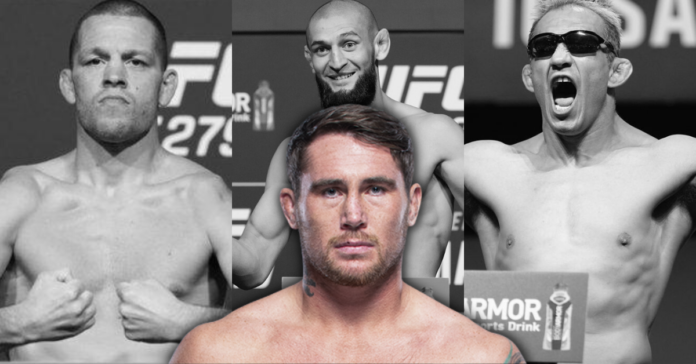 Darren Till is putting a positive spin on the Khamzat Chimaev weight-miss situation. ‘The Gorrilla’ is a training partner of the Russian-born athlete and was helping him get ready for his UFC 279 main event spot.

Yesterday, it was announced that ‘Borz’ had missed weight by a significant margin. The Russian fighter was contracted to fight Nate Diaz at 170 lbs and weighed in official at 178.5. This has caused a major shuffle of the fighters competing on UFC 279 as Stockton’s Nate Diaz refused to fight Chimaev in light of these events.

Instead of Diaz vs Chimaev, the main event will now be Nate Diaz vs Tony Ferguson in a five-round welterweight fight. ‘El Cucuy‘ is a former interim UFC Lightweight World Champion and made his UFC debut in 2011 upon winning The Ultimate Fighter season 13. Ferguson was initially booked to fight Li Jingliang.

Kevin Holland vs Daniel Rodriguez is off the table, and we will instead see Holland vs Chimaev as a five-round co-main event. Li Jingliang will now fight ‘D-Rod.’

The Englishman and training partner of Chimaev, Darren Till is seeing the positive in all of these great matchups. On Twitter, he said:

“Nate gets the fight he deserves… Khamzat gets to smesh Holland… & Li & D.Rod will actually be a sick fight, plus Li fighting a guy 10 pounds heavier than him. What a G!!”

Till has not returned to the octagon after his two consecutive losses to Robert Whittaker and Derek Brunson. The 29-year-old athlete has been away for over a year now, however is looking to have a comeback fight against Dricus du Plessis at UFC 282 in December.

Strikeforce Heavyweight Grand Prix Champion, UFC Two-Division Champion, and Olympian Daniel Cormier also shared his thoughts on the situation. He was very happy with the matchup changes happening on UFC 279. On Twitter, he wrote that this is an improvement over the initial bookings:

“Card may be better, that is why the @ufc is the best fight company in the game. In hours not only is the card better but matchups are real even! Gonna be a fun night! #UFC279”

Fans and pundits alike seem happy with the matchup changes done on this fight event. UFC 279 will broadcast live from the T-Mobile Arena in Las Vegas, Nevada on Saturday, September 10th.