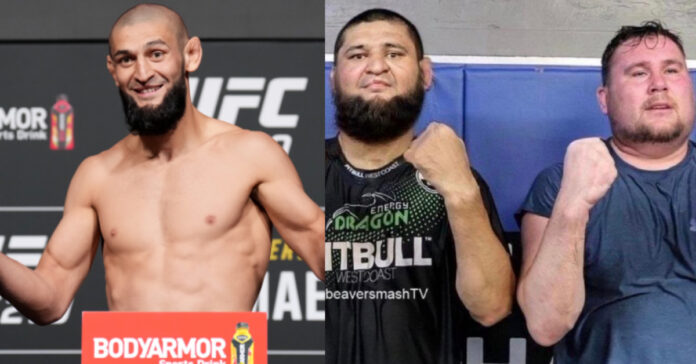 Khamzat Chimaev was criticized by fellow fighters after he failed to make weight for UFC 279.

The top-ranked welterweight contender was scheduled to take on Nate Diaz in the main event this Saturday at T-Mobile Arena in Las Vegas, Nevada. Tensions were rising during the build-up and the pre-fight press conference got called off due to the risk of a brawl backstage.

At this morning’s weigh-ins, Chimaev missed weight by a huge margin, showing up at 178.5 pounds for the 170-pound contest. Chimaev put the pay-per-view finale at risk as the fight would not get sanctioned by the athletic commission based on the current standings.

Following the epic mishap, reactions from fellow fighters and members of the community came flooding in.

Top-ranked welterweight Belal Muhammad tweeted: “Me vs khamzat at 185 Tony vs Nate at 170 and. leech can be the special guest referee.”

Derek Brunson chimed in, tweeting: “The Smash brothers are eating good ….178.5 for Chimaev. What an disaster #UFC279”

Mini Khabib claimed to have spotted Chimaev eating dinner and drinking sparkling water the night before at a restaurant. Michael Chiesa shared her message: “Ran into Khamzat Chimaev He was hanging out at a restaurant for hours drinking sparkling water and eating the night before weigh ins and now Khamzat misses weight . I was worried all night about this when I saw it.hope the fight still happens tomorrow . #ufc279.”

Julian Marquez asked the burning question: “Okay, so what happens next? 8lbs is a lot of weight. I’m pretty sure commission cuts the fight after 5lb over (not 100% on that). Did we just lose our headliner?”

Kevin Holland made weight early and shared a video commenting on the situation.

Who will be next for Khamzat Chimaev?