LowKickMMA.com
Home UFC News Bryce Mitchell booked against Movsar Evloev in a battle of the unbeaten 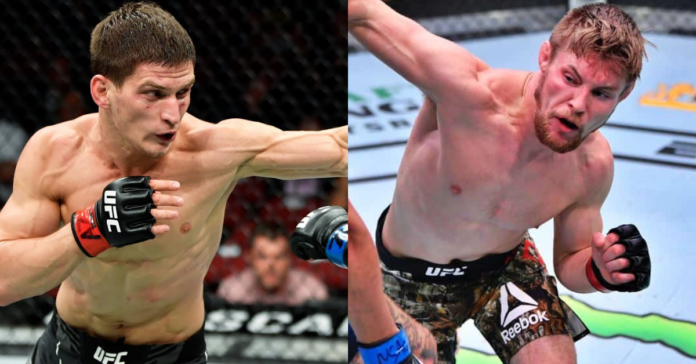 The submission specialist Bryce Mitchell has been booked to fight against the Russian featherweight Movsar Evloev at an upcoming UFC Fight Night this November. Both UFC fighters will be coming into this fight with undefeated records.

The former M-1 Global Champion Evloev carries an unblemished 16-0, winning 7 via stoppage. The US-born grappling whiz Bryce Mitchell ‘Thug Nasty’ will enter this bout with a perfect 15-0, 9 of which were won by submission.

Thus far in the UFC, Russia’s Movsar Evloev has defeated fighters such as Dan Ige, Hakeem Dawodu, and Nik Lentz, among others. These victories have earned him a spot at the number 10 rankings officially but the UFC. This 28-year-old fighter has a background in Greco-Roman wrestling and is focused on takedowns plus control time. Among active featherweights, he has the fourth-highest control time percentage ranking.

Evloev will be facing the man who holds the number one position for control time percentage among active UFC featherweights; Bryce Mitchell. Mitchell has a background in wrestling and is a dangerous Jiu-Jitsu player having finished 60% of his fights by way of submission. While competing in the UFC, this 27-year-old fighter has defeated notable combatants such as Edson Barboza, Andre Fili, and others, which has earned him an official ranking within the top ten. ‘Thug Nasty’ also has a hip-hop album.

Russia’s Movsar Evloev has been calling to fight a top-ten opponent for some time. In the post-fight press conference after his last bout, he said:

These two top-ranked featherweight fighters have been booked to face off at a UFC event booked for November 5 later this year hosted at the UFC Apex in Las Vegas. Also featured at this event will be a battle of Brazilians when Marina Rodriguez has a showdown against Amanda Lemos. Additionally, Miranda Maverick will meet Shanna Young on this November 2022 fight event.