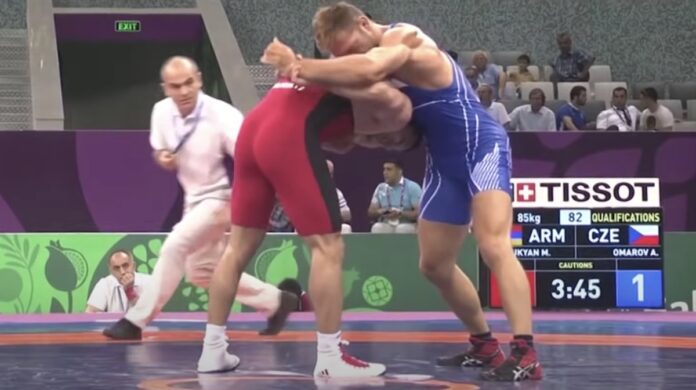 Here is everything that you need to know about Greco Roman wrestling. We’ll go over how it was developed and go over the rule set of the sport.

We also listed some of the most notable MMA fighters that were also accomplished Greco Roman wrestlers.

The history of Greco Roman wrestling

While some might believe that Greco Roman wrestling is an ancient form of wrestling from the name, it isn’t. This style of wrestling was actually developed in France during the late 1800s.

The wrestler credited with coming up with Greco Roman Wrestler was Jean Exbrayat. A French soldier that was one of the most accomplished wrestlers within the French army.

After serving in the French army, Exbrayat would wrestle in French carnivals and fairs throughout the country. Displaying his excellent wrestling skills and taking on anyone that wished to test his skills.

As Exbrayat did this, he would begin developing his own style of wrestling. One that he would call “Flat Hand Wrestling” or “French Wrestling.”

Exbrayat also established rules for his style to differentiate it from other styles of folk wrestling. You could only perform takedowns above your opponent’s waist and submissions were not allowed.

A Greek wrestler named Basilo Bartoletti would coin the term Greco Roman wrestling. Claiming that this style of wrestling was similar to ancient Greek wrestling, when in reality they were nothing alike.

That didn’t matter, because the name stuck and everyone began referring to this style as Greco Roman style wrestling.

Thanks to the popularity of Greco Roman style wrestling across Europe, this led to it becoming an Olympic event. Greco Roman wrestling was added to the very first modern edition of the Olympic Games in 1896.

Then it was added to the Summer Olympics in 1904 and has been a part of the Olympics until this day. The only other form of wrestling that is an Olympic sport along with Greco Roman wrestling is freestyle wrestling.

The rules of Greco Roman wrestling

The format of a Greco Roman wrestling match

There are five ways to win a Greco Roman wrestling match. Those methods of victory include:

Greco Roman wrestling is widely popular throughout Europe, Russia, and in the US. It has also become rather popular in middle eastern countries like Iran and Azerbaijan.

What are the biggest Greco Roman Wrestling events?

There have been numerous MMA fighters with Greco Roman backgrounds that have been successful at the sport. Even some that have won world championships and became UFC hall of farmers.