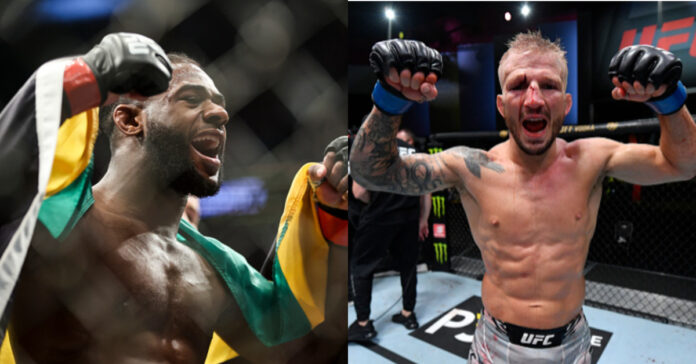 Reigning UFC bantamweight champion Aljamain Sterling issued a warning to TJ Dillashaw after his UFC 280 opponent said that ‘Funk Master’ was “not a dangerous fighter.”

On October 22nd, Sterling will step back into the Octagon to defend his bantamweight world title for the second time following his split decision win over Petr Yan at UFC 273. He meets two-time bantamweight champion TJ Dillashaw in the evening’s co-main event. Dillashaw returned to the UFC in July 2021 following a 24-month suspension by USADA after testing positive for recombinant human erythropoietin (EPO) prior to a January 2019 bout with Henry Cejudo.

Dillashaw earned a win over Cory Sandhagen in his return and as a result, will now get an opportunity to reclaim UFC gold against Sterling this Fall. While speaking with Ariel Helwani on The MMA Hour, Dillashaw discussed Sterling’s win over Yan and let the host know that he was far from impressed.

“He won the fight,” Dillashaw told Ariel Helwani on The MMA Hour. “The first one was kind of a s***** way to win the belt, and the way he kind of handled it made himself really hated. But still, I don’t feel like he gained that much more respect for the fact that he’s not a dangerous fighter.

Never one to turn the other cheek, Aljamain Sterling responded to Dillashaw’s claim that he is not a dangerous fighter during an appearance on his YouTube channel.

“He thinks it’s not going to be a dangerous fight. Meaning he thinks I’m just gonna go out there and grapple the whole time. I can ensure you T.J., that is not what I’m looking to do. 100% not. I can’t wait to drill my knuckles through your face… I think you would be ill-advised to overlook my striking. I hope that’s what you do because if you do that, it’s gonna be a bad night for Mr. Dilla-roids.”

Aljamain Sterling Plans to Hand Dillashaw His ‘A** on a Platter’

Aljamain Sterling is currently riding a seven-fight win streak dating back to 2018 including back-to-back wins over former world champion Petr Yan. Their first meeting ended with a healthy dose of controversy as Yan landed an illegal knee in the fourth round. ‘No Mercy’ appeared to be on his way to a decision victory, but instead, he lost the bout and the title via disqualification.

‘Funk Master’ and ‘No Mercy’ ran it back at UFC 273 where Sterling narrowly escaped with his title, besting the Russian-born Yan via a split decision. Now Sterling puts his focus on defeating another former world champion in TJ Dillashaw.

“I can’t wait to be the guy that hands it to you,” Sterling said. “Hands you your a** on a platter, give you a spank on the a**, and tell you thanks for coming. You played well.”