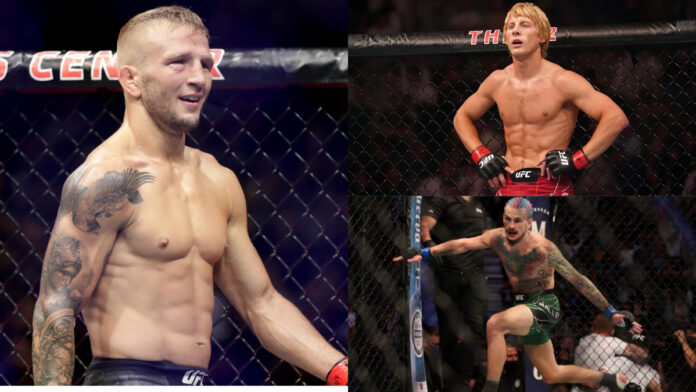 TJ Dillashaw does not see Aljamain Sterling as a real fighter.

Ahead of his return to competition against the current UFC bantamweight title holder, Dillashaw talked about Sterling’s unexpected win over Petr Yan.

In an appearance on The MMA Hour with Ariel Helwani, Dillashaw stated that he was surprised to see Sterling win and that he’s more of an athlete than a fighter.

“I definitely was picking Yan,” he said. “He wanted to fight me, he was very verbal that he wanted me next and I wanted to be there front row for a fight I thought he was going to win.

“I don’t feel like he gained that much more respect, the fact that he’s not like a dangerous fighter. He’s not someone you have to go out there and worry about getting finished or put to sleep. I’ve always known he’s great, he’s got some great skills in what he does.

“To me when I look at him, he’s not a fighter. He’s more of an athlete which you know our sport is professional athlete, but we’re all wrong to be fighters to not go out there and get that finish.”

Dillashaw talked about the upcoming bout between Sean O’Malley and Yan. While he does understand why the pairing happened, he doesn’t believe it to be on O’Malley’s achievements.

“Yeah, I’m surprised accolades-wise of him not even being in the top 10 getting to fight someone like Yan. But he’s done a great job of promoting himself. He’s gotten the attention, he does the stuff that a lot of us don’t want to do.”

“He’s fully a character, he’s doing the YouTubes, the Twitch, whatever it may be, and put himself out there and being colorful so he’s promoted himself hard that way and working hard, so more power to him.”

“I’m not sure it’s a great fight for him but maybe he’ll prove us all wrong.”

Before Paddy Pimblett‘s latest win at UFC London, TJ Dillashaw had criticized “The Baddy” for gaining copious amounts of weight in his time off. He clarified his stance on the Scouser.

“The thing I’m worried about is how fat he gets after fight camps,” he added. “I don’t think he’ll be a world champion because of the fact that he’s got no dedication in between fights… if you blew up 30 pounds, how can you take a fight that fast or be getting better all the time.”

“Be in the f**king gym, you have the chance to make some serious cash right now and they’re going to start throwing you to the wolves. You’re going to start getting top 15, top 10, which I don’t know if he’s really ready for but it was a dick thing to say but I wasn’t trying to. That was my concern, he’s got this opportunity, he’s blowing it by being a fata**.”

Are you excited to see TJ Dillashaw take on Sterling?