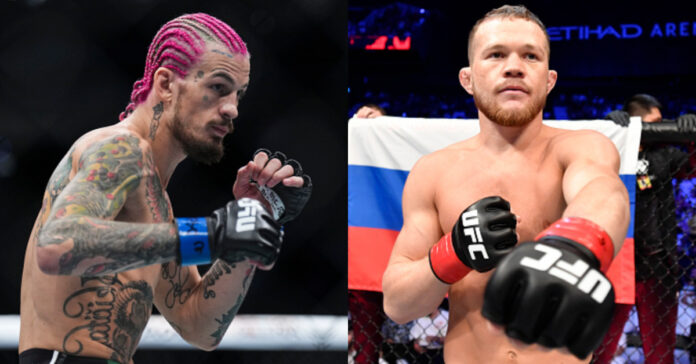 Sean O’Malley will make a major step up in competition when he takes on former UFC bantamweight champion Petr Yan at UFC 280.

On the heels of a disappointing no-contest with Pedro Munhoz at UFC 276, the No. 13 ranked UFC bantamweight will take a giant leap up in competition to face the No. 1 ranked contender this October. During his appearance on ESPN’s DC & RC, O’Malley broke the news and shared his excitement.

“I’m so excited for this. I almost can’t even believe it’s real, it’s happening,” O’Malley said

“He’s obviously the No. 1 contender right now. He’s pretty much 1-1 against ‘Aljo’ [Aljamain Sterling]. He whooped Aljo the first fight, then he got kind of whooped up in the second fight. But he could be considered the champion. The whole top 5, really — the way Petr beat Jose Aldo was one of my favorite performances of Petr Yan. So going in there and stepping up against a guy like Petr is exciting, it’s motivating, and it’s the biggest fight in the bantamweight division right now. I think it’s bigger than Aljo vs. T.J. [Dillashaw].”

‘Sugar’ quickly became a fan favorite following back-to-back first-round knockouts of Jose Alberto Quiñonez and Eddie Wineland in 2020. O’Malley suffered his first setback at UFC 252 when he lost to Marlon Vera in the first round after sustaining a leg injury. The Helena, Montana native responded with three spectacular knockout wins against Thomas Almeida, Kris Moutinho, and Raulian Paiva.

In his last outing, Sean O’Malley was matched up with No. 9 ranked contender Pedro Munhoz. Just over three minutes into the second round, an accidental eye poke by O’Malley forced Jason Herzog to call a stop to the bout at the advice of the ringside physician.

Sean O’Malley has only faced two top ten contenders in his UFC career thus far, but ‘Sugar’ says that he has been ready for an elite-level competitor like Petr Yan for quite a while.

“I’ve been preparing for this for a long time,” O’Malley said. “I’ve felt like I was capable to fight these guys for a long time, it’s just, I never got an opportunity. Pedro was the first guy in the top 10 I got an opportunity to fight. In my eyes, I feel like I won that fight, dominated, didn’t get hit once in the face or the body. So it’s perfect. I’m just so excited to get out there. It’s the first time I’m going to be an underdog. I’m assuming I’ll be an underdog, which is super cool.“

“So I think it’s going to be a super interesting fight. He says he’s a master of boxing. I like to think of myself as a very, very high-level striker.”

According to the oddsmakers, Sean O’Malley is a +375 underdog, a first in his UFC career. Yan on the other hand opened as a -500 favorite, meaning he has a more than 80 percent probability of winning. Despite being a sizeable underdog for the first time in his UFC career, ‘Sugar’ is as confident as ever about his chances to best the former world champion when they step into the Octagon later this year.

“It’s the best dude I’ve ever fought, hands down, and I’m very excited for the opportunity. And I just believe I’m going to be better October 22nd than Petr.”

While the bout has not been made official, both fighters have verbally agreed to the matchup according to a report from MMA Fighting.