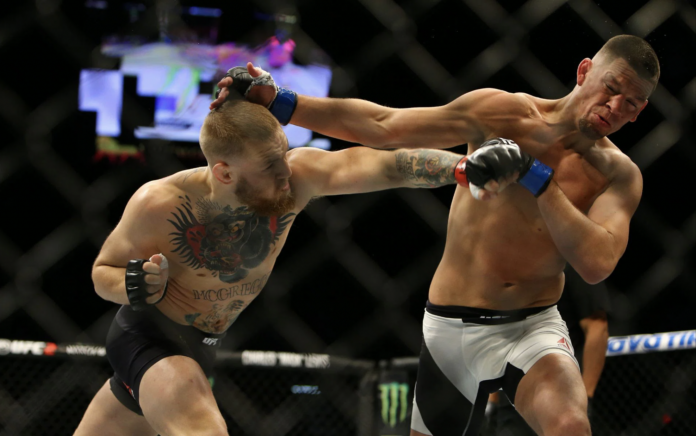 UFC welterweight Nate Diaz says that his rivalry with fellow superstar, Conor McGregor, is not over.

Diaz is set to face Khamzat Chimaev this weekend in the main vent of UFC 279, but even still he cannot escape his infamous rivalry with Conor McGregor.

The pair battled it out twice back in 2016, the first of which saw Nate Diaz famously stun and submit McGregor as a late replacement. McGregor would go on to earn a win in the series just five months later, getting the nod after a hard-fought five-round war.

Ever since, talks of a third fight between the two has not been far when either man is discussed. It did seem a good a time as ever to book the fight now with both men coming off back-to-back loses but instead Diaz elected to take on Chimaev.

However Diaz was quizzed on whether the trilogy bout would take place and it seems good luck for MMA fans.

“The timing’s not on right now,” Diaz told Inside Fighting. “We’ll worry about that later. It’s for sure going to happen at some point. … Yeah, at some point. He needs to get back on what he’s got to do, whatever that is. It’s like, when we match up, we’re going to match up. But we ain’t going nowhere.”

“This fight right here that I’ve got coming up is brought to you by Real Fight Inc. The UFC is obviously pushing their fighter on me – not with me, but against me. So this is the first real fight event that we’ve got is right now, right here.”

Who have you got this weekend, Nate Diaz or Khamzat Chimaev?