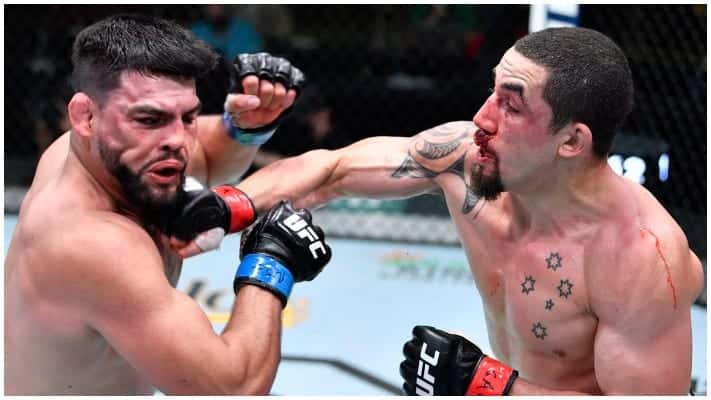 Despite losing the co-main event just hours before, UFC Vegas 24 delivered some impressive performances from the fighters at the UFC Apex. Middleweight Gerald Meerschaert and bantamweight Tony Gravely were among those who earned an extra ,000 for their efforts in the octagon. Robert Whittaker and Kelvin Gastelum also earned themselves an extra bag of cash.

Performance of the Night: Gerald Meerschaert

Meerschaert turned in a phenomenal submission win over Bartosz Fabinski in the first-round, in his first apperance since falling to Khamzat Chimaev last September. It was a relatively easy night of work for the Wisconsin native who became the submission wins leader in UFC middleweight history. After taking a few early shots on the feet, Meerschaert quickly took the fight to the ground against the cage, sinking in a tight guillotine choke that put Fabinski to sleep halfway through the opening round.

Performance of the Night: Tony Gravely

Gravely came into the night as a rising bantamweight prospect in the stacked men’s 135-pound division. Both Gravely and opponent Anthony Birchak began a standup war in the middle of the octagon from the get-go. After a highly-entertaining opening round, Gravely didn’t let up in Round 2; countering a low-calf kick from Birchak with a stiff jab that knocked him out cold. The “Dana White’s Contender Series” alumni has proven to be a legit prospect and has now won two of his first three fights in the UFC.

Fight of the Night: Robert Whittaker vs. Kelvin Gastelum

Last but not least, the main event between top middleweights Robert Whittaker and Kelvin Gastelum didn’t disappoint fans. Whittaker turned in arguably one of the best performances of his career against Gastelum, one of the toughest competitors in the division. “The Reaper” used his range on the feet to overwhelm the smaller Gastelum, who had his own moments in the striking department. Whittaker was able to utilize a few takedowns as well and completely dominated the fight, coasting to a unanimous decision victory (50-45 x 3).

Next for Whittaker is more than likely a rematch with middleweight champion Israel Adesanya, who is coming off a light-heavyweight title loss to Jan Blachowicz at UFC 259.

Do you agree with the bonuses given out at UFC Vegas 24?