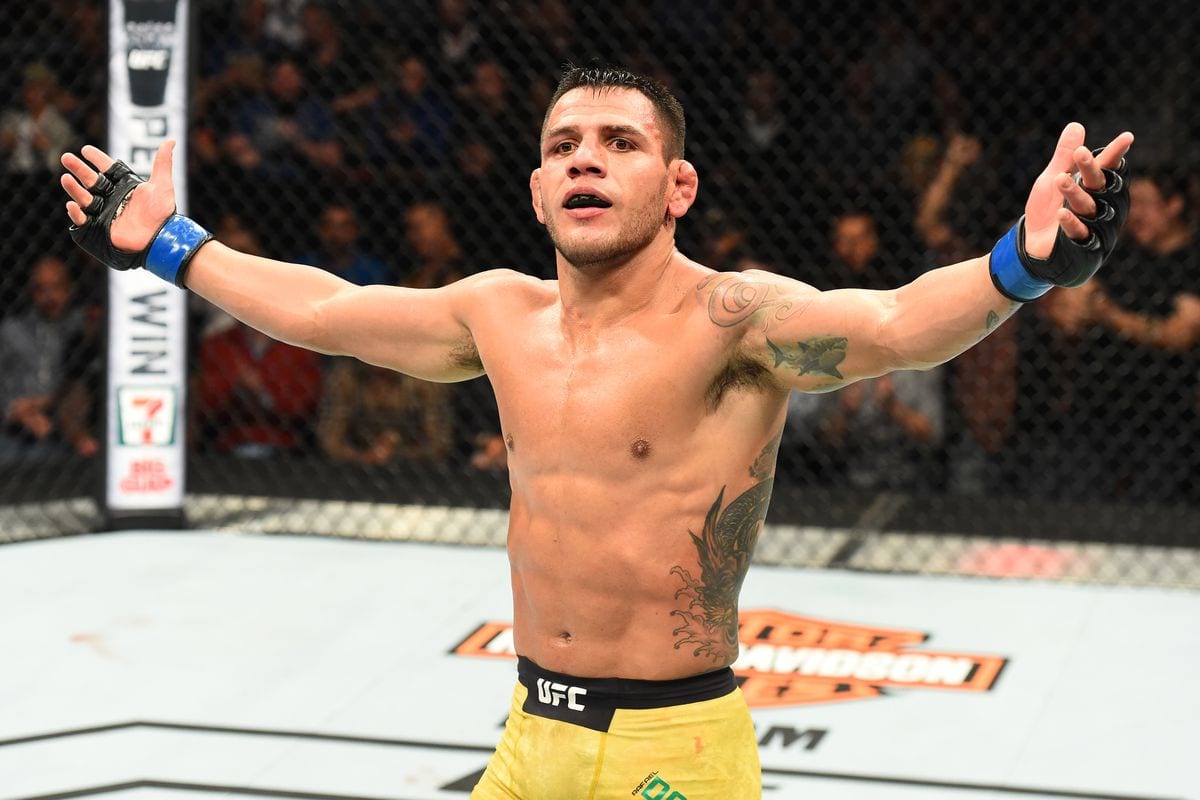 After initially making noise in the welterweight division, dos Anjos (28-11) has dropped his last two fights. While his most recent defeats are at the hands of Kamaru Usman and Colby Covington, Lee marks a significant step down in perceived difficulty.

As for Lee (17-4). “The Motown Phenom” has been competing in the UFC since 2014 and he is still only 26 years old. Lee has decided to move up in weight after years of struggling to make 155 pounds. Let’s see how he fairs.

The fighters trade heavy leg kicks to start. Lee drops RDA with a right hand. He jumps on the back of dos Anjos but the Brazilian gets back to his feet with ease. The fighters trade leg kicks again. Lee shoots a double but dos Anjos defends against the cage with a kimura attempt. Lee eats a knee from RDA in the clinch but Lee still works for the takedown. The fight stalls a bit in the position. Less than 90 seconds left Lee backs up and lands a big kick and a knee to the body of RDA. Dos Anjos lands a glancing head kick on Lee. He takes Lee down and looks for a front choke. Lee defends and the round ends.

Dos Anjos opens up with a right hand-leg kick combination. Lee immediately looks for a takedown. RDA lands a trip and reverses position. He gets back to the center of the Octagon. Dos Anjos lands another head kick that wobbles Lee a bit. Lee answers with a hard head kick, he backs up RDA with a flurry of punches and works for a takedown against the cage. The fight stalls as Lee works to get the fight to the canvas. Lee steps back and both fighters open up with punches. Lee gets rocked and dives for a leg. The round ends.

Dos Anjos comes out with a flying knee. He follows up with a head kick. Lee throws a body kick. RDA looks very fresh, he shoots a takedown and scores it. He ends up in side control and works for a better position. Lee escapes and gets back to his feet but eats a knee. Lee quickly spins and takes RDA’s back. He looks for a rear naked choke but the Brazilian defends and lands a couple of right hands. Lee tries to pop back to his feet but RDA is doing a good job at controlling Lee and dealing damage. Dos Anjos gets revered by Lee. Lee takes RDA down and lands a few elbows. Dos Anjos spins out. The round ends.

Dos Anjos doubles up his jab to start round four. Lee throws one of his own. Both fighters throw a leg kick but RDA gets caught in the groin. RDA comes out with a one-two. He lands a hard head kick. Lee answers with one of his own. The American looks to take RDA to the ground but dos Anjos defends again. Lee goes to the body with a hard kick. He follows up with a takedown pressure against the cage. RDA defends and circles back to the center of the Octagon. He lands a hard leg kick, Lee shoots, RDA defends. Lee is exhausted. Dos Anjos closes in and looks for the arm triangle choke. That’s a wrap.