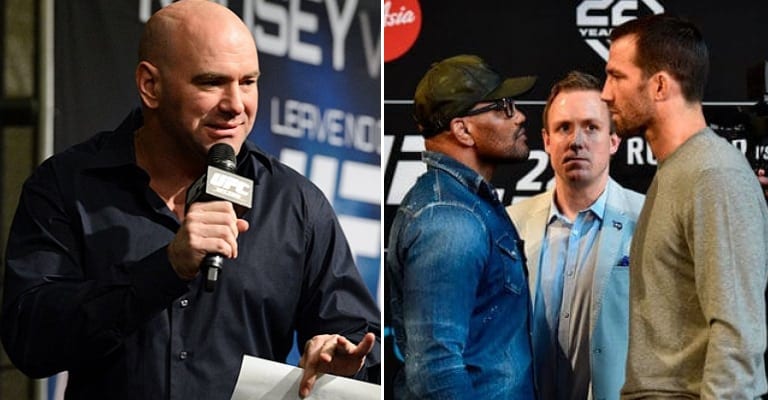 Tonight (Sat., February 10, 2018), the UFC will trudge forward with its packed early 2018 schedule, this time offering UFC 221 live on pay-per-view from Perth, Australia.

It’s an event that has been largely derided by the majority of MMA media as one of the lesser pay-per-view cards the promotion has put on for some time, and indeed, the card has dubious potential to join the list of the worst pay-per-view cards of all-time, at least on paper.

That’s not to say that the Australian fighters on the card won’t show up and put on a night of exciting bouts for the home crowd; they most certainly could and assuming otherwise would be foolish and disrespectful to the athletes who have worked so hard to get where they are in the sport.

And it certainly didn’t help that the main event saw a late-notice change of the worst form when middleweight champion and nearby fan favorite Robert Whittaker was forced from his main event bout with Luke Rockhold thanks to a host of frightening injuries, a fact that was only dampened by Romero missing weight and being unable to contend for the interim title. But overall, the fact that the UFC was even in that position due to the overall shallowness of this card just shows the tough state the promotion is in during 2018.

Attempting to put on an event every single weekend with little to no name value and maybe even less promotion or time to promote it is only helping their FOX TV schedule, and it shows just how much the promotion has simply spread itself thin under new owners Endeavor (formerly WME-IMG).

As many in the media such as MMA Fighting’s Luke Thomas have noted during the week leading up to UFC 222, they don’t have the roster depth to keep up this breakneck pace and maintain interest. And Deadspin’s Patrick Wyman succinctly dissected that their insistence on believing the product will sell just because it has the UFC brand attached to it is a foolhardy assumption.

Neither is sustainable for long-term success in the fight game, and it would seem Endeavor is rushing head-first into booking the biggest spectacles they can without much concern for the consequences soon to arise.

Making Conor McGregor vs. Floyd Mayweather in the octagon is a perfect example of this cash-grab-and-go strategy, as is making Tyron Woodley vs. Nate Diaz in a farcical welterweight title bout. Last-minutes changes, weight misses, and injuries ruining main events are unpredictable sets of circumstances that certainly don’t help, but the UFC’s seeming insistence on making both FOX-aired and pay-per-view cards as shallow and uninspiring as possible is why offerings like tonight’s cannot recover from losing a huge bout.

It was most likely happening for years if we’re honest – but the outright deluge of viewers and fans brought in by crossover stars Conor McGregor and Ronda Rousey truly masked the clear evidence that this plan was not working. With their million buy-ability now gone, nearly every metric measuring the UFC’s success or lack thereof proves it is not – pay-per-view buys are way down, and big FOX ratings have hit an all-time low.

With a new TV deal on the horizon, that’s the worst news Endeavor could hear, so they appear ready to pull out the stops and book the most ‘superfights’ they can in order to drum up interest. They’re major players in Hollywood, so that’s no surprise. It might even work in the short term as it drums up some mainstream attention (‘might’ is the key word there, though).

If it actually gets a major network to pay the reported outlandish figure the UFC is asking is a different story altogether, however, and with figures falling to atrocious levels as the UFC is no longer a special event with watered-down events every weekend, it may turn out they can’t.

What’s clear is that something has to change, however, as tonight’s Rockhold vs. Romero main event is a great fight to be certain, but also one that had been repeatedly discussed for a FOX or Fight Night event, and now the UFC is forcing fans to pay $65 to watch it without any real meat on the undercard to boot.

That fact proves just how out of touch the UFC is with their fans right now, and they’re quickly losing the full backing of many fighters due to low pay and mounting issues over treatment. Something has to change, and it’s unclear when or if anything ever will.

If the new owners (who aren’t so new anymore) want the numbers to pick up in any or all facets of measurable success, they’re going to have to adapt, and serving up a pay-per-view like tonight’s is the exact opposite of doing just that.

Maybe they have something up their sleeve, and it will most likely involve the return of McGregor. A return to the previous glory days of the UFC could be rapidly moving out of reach for the world’s biggest MMA promoters, however, and their insistence to badly water down the schedule while assuming the fanbase would blindly follow the UFC brand are two major reasons why.

Do you envision a bounceback from the UFC this year, or are they digging themselves into an even bigger hole?