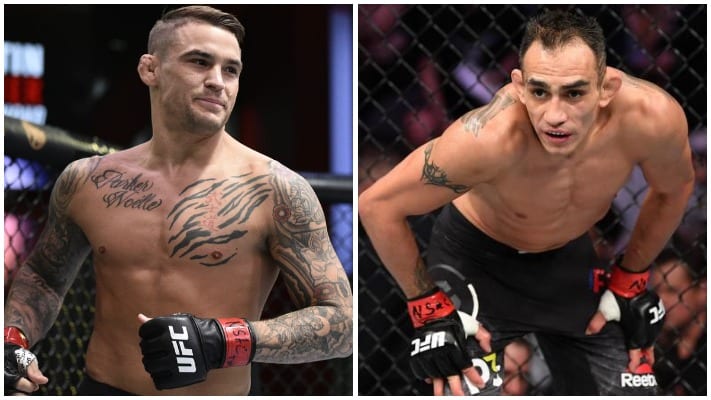 Tony Ferguson believes he and Dustin Poirier should be fighting for the vacant UFC lightweight title next.

The lightweight title is now vacant following Khabib Nurmagomedov‘s retirement at UFC 254 this past weekend and that has led to many speculating who should compete for it next.

And as far as Ferguson is concerned, it should be him and Poirier.

“Well, I don’t know,” Ferguson told Submission Radio. “I kind of called out everybody on one post, and Dustin already f*cken said ‘Let’s do it’. So, he wants to fight for the f*cken title for me, so he’s already the kind of dude to skip sh*t and kind of whatever he’s gotta do. So, the way I called it was, you gotta have myself and you gotta have Dustin Poirier fight for the title.

“I mean, [Justin] Gaethje f*cking lost. I’ve been sitting here and I’ve been doing my sh*t and making sure I’m keeping cool, calm and collected. Being real, give me the f*cking title shot. Give me my chance. You guys want to see me fight, I really want to fight.”

Ferguson is coming off a loss to Gaethje in their interim lightweight title fight at UFC 249 in May. However, he was a former interim champion himself and was notably on a 12-fight winning streak as he was initially getting ready to face Nurmagomedov in April.

If anyone deserves to fight for the undisputed title, it’s Ferguson and he is certainly ready for a belt.

“I’m ready for a belt,” Ferguson said. “That’s why I said I’m gonna throw a bit more media out there. I haven’t done it because I haven’t had a reason before. Even because I didn’t want to scare Khabib away. But even without f*cken fighting that b*tch I made him retire. So, like I said, props to you, ride off into the sunset with your f*cking hat. When you come back, I’ll put my f*cken baseball hat against your hat and we’ll have a nice cultured exchange.”

“So, like I said, he can ride off into the sunset, he can do his thing, but I’m not gonna change because somebody else is gone. I have to keep on my path. Props to him for completing his mission for his pops and everything like that, but my family would want me to keep continuing on in my dream and all my stuff and making sure I keep my word against other opponents.”

Before Nurmagomedov’s retirement, a fight between Poirier and Conor McGregor was slated for January 23 and many believe if made official, that will go ahead as a vacant title fight.

However, McGregor doesn’t deserve the opportunity according to Ferguson.

“He just deserves a chance to fight, that’s what he deserves,” Ferguson added. “He just deserves a chance to fight. F*ck him and fighting for the title. He needs to fight. He needs to fight somebody like, I don’t know, top 15. Get his ass back on there. He don’t belong in the top five. Get the f*ck out of here. F*ck you, pay me, dude. Nothing personal, but you’re still a b*tch, you know what I mean?

“If you want that heavy competition, quit hanging around everybody else and get your ass back in the gym, or f*cken your own place. Same thing with all these other dudes. Take f*cking notes, man. If you take that many notes, you guys should be better than what you are and have more balls. Looks like somebody f*cken got neutered along the way. At least the top three. Just not me.”

Do you think it should be Ferguson vs. Poirier for the vacant title?