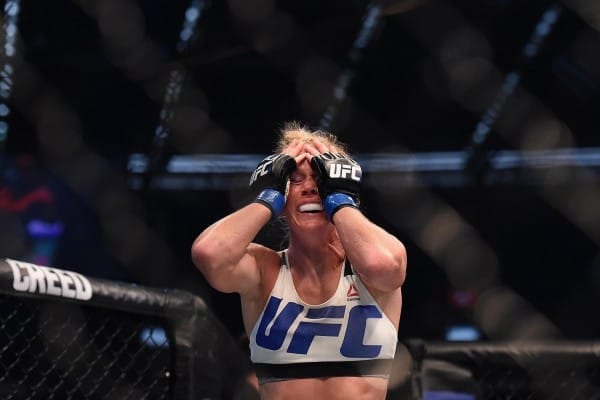 Mixed martial arts (MMA), and the fight game as a whole, is unlike no other sport or competition.

No matter how big a favorite a fighter is, or how untouchable a combatant may seem, it only takes one shot to end a fight, and one shot to change the entire landscape of a sport.

In a fight, anything can happen plain and simple, and we have seen that to be true many of times. We may often completely count one fighter out, only to see that fighter pull off a shocking victory for the ages.

That being said, let’s take a look at five of the biggest upsets throughout UFC history: 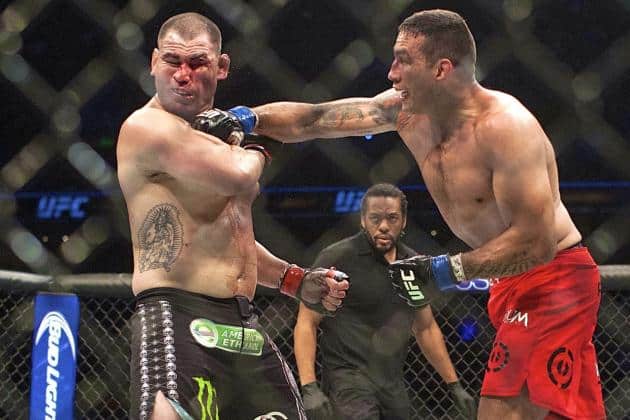 Although this upset may not have been as shocking as some of the others on this list, it was a monstrous one for sure.

After spending over a year and a half on the sidelines nursing numerous injuries, former heavyweight champion Cain Velasquez was set to return at UFC 188 last June in Mexico to put his title on the line against resurged Brazilian Fabricio “Vai Cavalo” Werdum.

Velasquez, a relentless animal known specifically for his never ending gas tank and constant pressure, was the clear favorite heading into the bout, and many were even considering him to be the best heavyweight to ever have competed in mixed martial arts.

The outcome, however, may not have proven that to be true.

“Vai Cavalo” came out firing right away, and began to pick Velasquez apart. The American Kickboxing Academy product seemed to have no answer for Werdum, and even began to tire which was extremely uncharacteristic of him.

The Brazilian would bloody Velasquez up before sinking in a fight ending choke during the third round to complete a dominant, yet surprising upset that few saw coming. 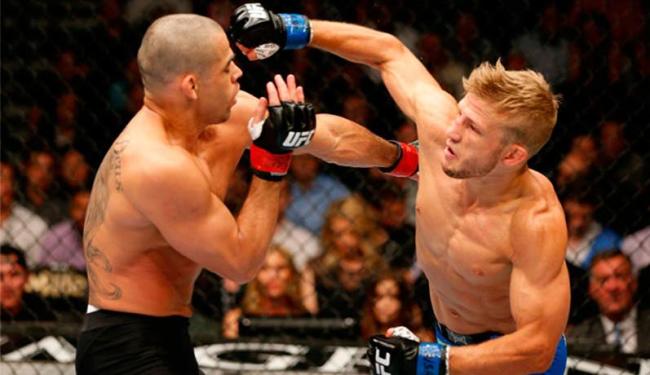 Leading up to UFC 173, which took place on May 24, 2015 from the MGM Grand in Las Vegas, bantamweight title challenger TJ Dillashaw was a massive underdog, and a relative unknown in some ways.

The champion at the time was Brazilian force Renan Barao, a man UFC president Dana White considered to be amongst the best fighters in the world. “The Baron” opened up as a gigantic 8-1 favorite over Dillashaw.

“Killashaw” had dropped losses to fighters like John Dodson, and Rafael Assuncao, and there were not many giving him a chance to dethrone Barao, but he ended up doing just that in emphatic fashion.

Dillashaw would land a brutal right hand in the opening frame that sent Barao to the canvas, and it was all “Killashaw” from there on out.

The former Team Alpha Male staple utterly dominated the Brazilian, putting on a masterful performance, while etching his name into the history books for securing a phenomenal upset victory. 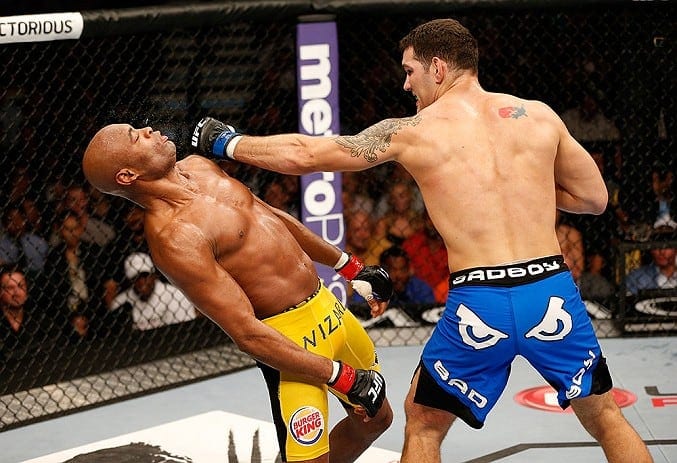 At the time of UFC 162, which went down on July 6, 2013, Anderson “The Spider” Silva was the pound-for-pound best fighter in the world, and widely considered to be the best fighter of all-time.

He held numerous records including 16-straight Octagon wins as well as 10-straight defenses of his long-held UFC middleweight title.

He would be putting that title on the line for the 11th consecutive time against a rising contender in Chris Weidman who some believed had the perfect skill set to dethrone Silva.

Although some were giving Weidman a fighting chance, many didn’t actually believe that Silva would go down, and no one saw it coming in the way that it did.

Like his usual self, Silva was dancing around with his hands down, playing games with his opponent. This was nothing new. But then he got caught.

Weidman landed a left hook in the second round that shockingly shut the lights off for Silva. The Serra-Longo product would throw the MMA world upside down which earned him a spot on this list along side his coach, who happens to be next… 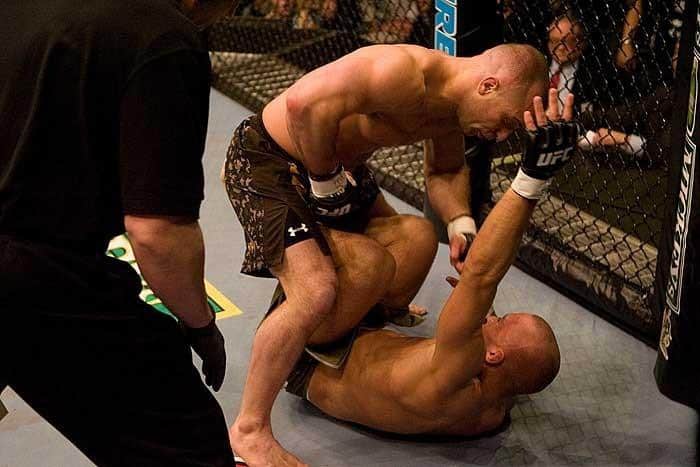 Former long-time UFC 170-pound champion Georges “Rush” St-Pierre is undoubtedly the best welterweight of all-time, and amongst the greatest fighters of all-time period.

He would put his title on the line against Matt “The Terror” Serra at UFC 69 in what many considered to be a gigantic mismatch.

Serra was a fighter with strong grappling skills, and solid power, but he was only 5-4 in the UFC at this point. GSP turned out to be a monstrous -1100 favorite over “The Terror” at one moment, and many expected the Canadian champion to win rather easily.

The Long Island native Serra had different plans, however, as he would land a huge shot in the very first round, and ultimately put St-Pierre away to become the welterweight champion of the world. Just to show the magnitude of the upset, St-Pierre would go on to fight 12 more times inside of the Octagon, not losing a single bout.

In fact, this was considered to be the greatest upset of all-time, until this past weekend… 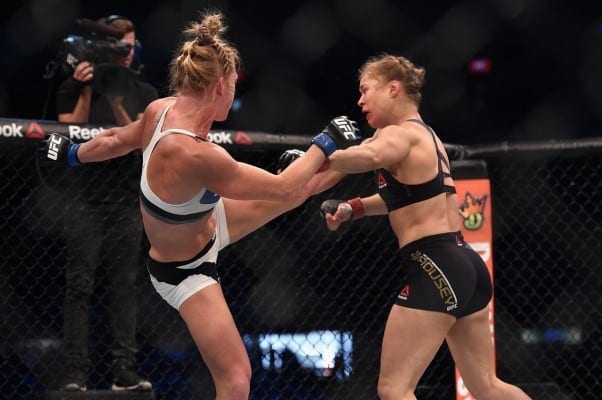 UFC 193 went down this past weekend (November 14, 2015) from Melbourne, Australia, and it may be one of the most talked about events in the history of combat sports.

Now former bantamweight champion “Rowdy” Ronda Rousey has established herself as a global superstar and a force to be reckoned with inside of the cage. Heading into the bout, her record stood at 12-0 with 12 finishes, and she seemed to be untouchable.

However, she had never faced anyone quite like Holly Holm, an undefeated mixed martial artist and a 19-time boxing champion.

Despite the credentials of “The Preacher’s Daughter”, Rousey remained as a -716 favorite, and many expected her to use her world class Judo to run through yet another opponent.

We had no idea what we were in for.

Holm came out early and proved herself, landing a few solid left hands in the first and even escaping Rousey’s signature arm bar. The “Rowdy” one was bloodied, and appeared to be tired at the end of the first.

The second round would prove to be the end of a dominant reign, as Holm would landed a brutal head kick that knocked Rousey out cold.

The internet, as well as the MMA world blew up in shock. Fans couldn’t believe what they were seeing.

The upset was massive, and shocking, but Holm didn’t just land a lucky shot, she dominated the woman who was thought to be an unbeatable phenom.

What other upsets do you recall?