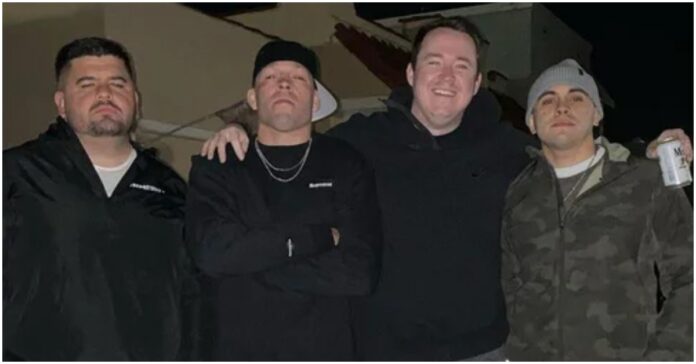 Shane Gillis has recalled hanging out with Nate Diaz, Marvin Vettori, and their friends ahead of UFC 270 which took place in Houston, Texas on January 22.

The comedian was in the area doing a show with Joe Rogan and after the UFC commentator had finished his set Gillis was given the green light to go hang out with Diaz. According to the long-time Diaz fan the night could not have played out more perfectly.

“Nobody on earth is better than Nate Diaz,” Gillis said on KFC Radio.

“If you can hang out with one athlete, Nate Diaz, without a doubt. Bro, it’s exactly what you think it is. It was everything I wanted.”

“He’s the nicest dude ever. As soon as I walked in, he was like, ‘Yo get this mother*cker one (a drink) also’ and he got me one.

“Then we walked outside, and he front kicked a stranger. He got into a fight with a stranger immediately.”

Gillis explained that Diaz was happily getting pictures with his fans until a muscular man came into the area. At that point, it becomes unclear if the person in question was threatening Diaz or if he just happened to be a big guy in the wrong area.

“One dude walked up that was like jacked,” Gillis said. “Nate Diaz was just immediately like, ‘Yo, you wanna run up on us?’ I was a little f*cked up. It was tough for me to decipher if he was mean mugging because of the situation. I didn’t see pre. As soon as Nate called him out the dude was immediately like, ‘What’s up?’

Gillis says that Diaz then slapped the man before people jumped in to break up the fight. However, that didn’t stop the Stockton, California native from getting in one final shot.

“His boys jumped in and pulled them apart and while they’re pulling them apart, he threw a front kick,” Gillis said. “I was just standing there like, ‘Yo!’ He connected on this dude’s hip which made him lose (his balance), he just flew everywhere.”

Apparently, the night didn’t get any calmer from that point. Gillis says that everyone in the group grappled with each other throughout the evening.

“Everybody in the squad was wrestling,” Gillis said. “Marvin Vettori was with us also. He’s a beast. He’s a monster. He had just got done fighting Izzy (Israel Adesanya) for the belt. He was with us like, ‘Don’t fuck with me.’

“I was enjoying it but I was just praying to God that no one started wrestling me,” Gillis added.

What do you make of Shane Gillis’ hilarious Nate Diaz story?