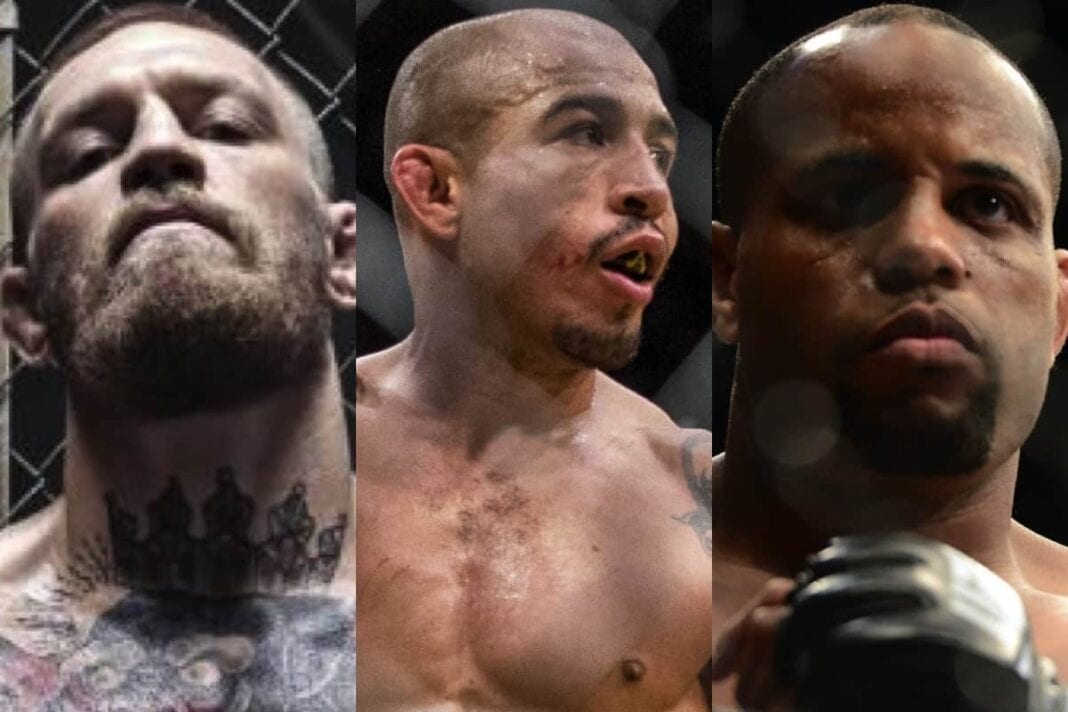 International Fight Week has finally come to an end, and it was capped off with last night’s (July 9, 2016) UFC 200 from the T-Mobile Arena, an event that was boasted as the ‘biggest, baddest card’ of all-time (as UFC President Dana White so emphatically put it).

The card went through so much throughout the months and more significantly, the last week leading up to last night, with two massive main events falling through due to extraordinarily dramatic circumstances. Featherweight champion Conor McGregor was originally set to headline the card with brash rival Nate Diaz; however, the Irishman was yanked from the card after failing to honor media obligations.

A worthy – if not equal – replacement main event was then set between heated rivals Jon Jones and Daniel Cormier and was so close to happening until Jones unfortunately was flagged by the United States Anti-Doping Agency (USADA) for a failed out-of-competition drug test and was thus removed from the card.

Cormier would be docked down two notches the card against legendary middleweight Anderson ‘The Spider’ Silva on two days’ notice, while the new main event pitted Miesha Tate versus Amanda Nunes in a women’s bantamweight title bout to close out the night.

The biggest attraction on the card was of course the return of ultra-popular former heavyweight champ Brock Lesnar to the Octagon.

And what a wild night it could have been…

While UFC 200 may not have exactly been the historically unparalleled event that the pre-fight promotion wanted you to believe, it was still a monumental events certainly not without its sizable share of crucial ramifications. 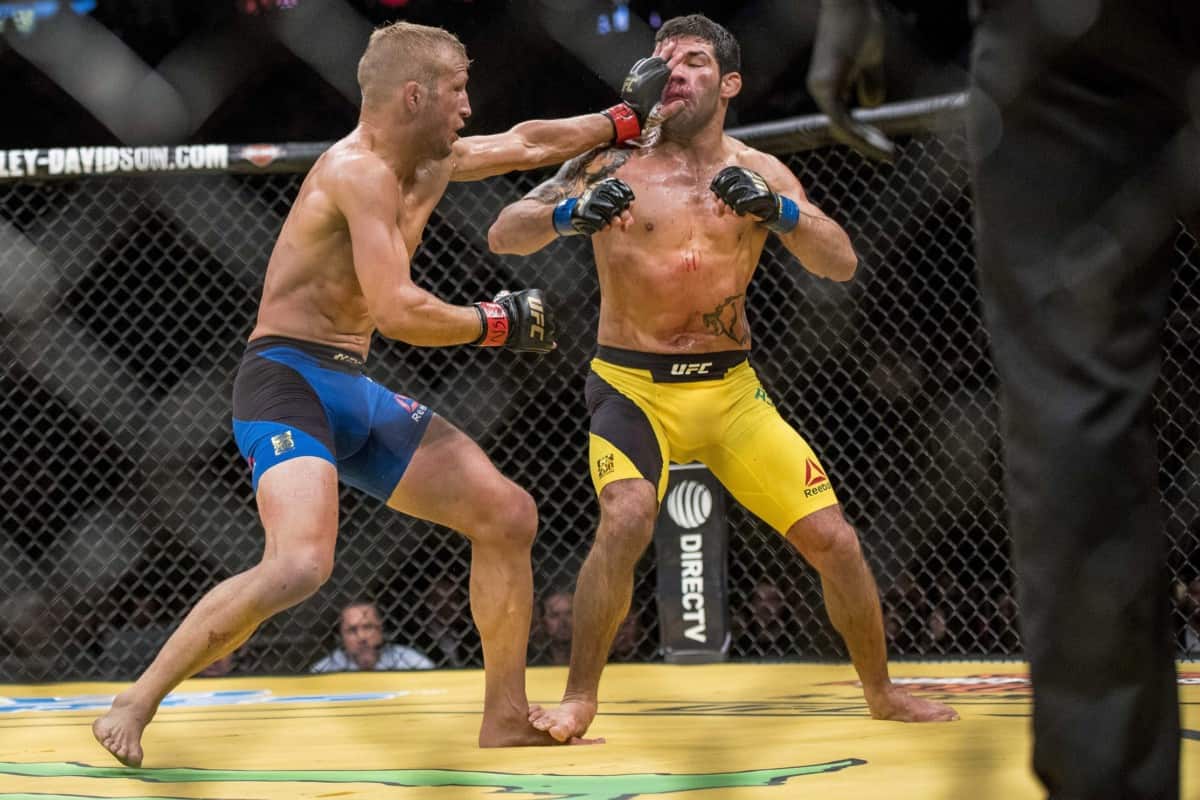 6. TJ Dillashaw Is Your #1 BW Contender

Dillashaw dominated Assuncao throughout the three rounds the men shared the Octagon, with his superior footwork and movement proving to be too much for his counterpart to overcome.

The fact that Dillashaw made the No. 3-ranked 135-pound contender look absolutely silly proves how good the former champ really is, and also how much he deserves another crack at bantamweight king Dominick Cruz in the near future.

Cruz came back after a lengthy layoff from the sport to challenge Dillashaw for the title he never lost, in a razor-thin five-round war for the title.

Ultimately Cruz would take home the split decision win along with the gold strap that Dillashaw worked so hard to capture after ‘The Dominator’ departed due to his unfortunate injuries.

Dillashaw is one of the few, if not the only, man to give Cruz a run for his money in this division, and a rematch between the two masters of movement may be upon us sooner rather than later. 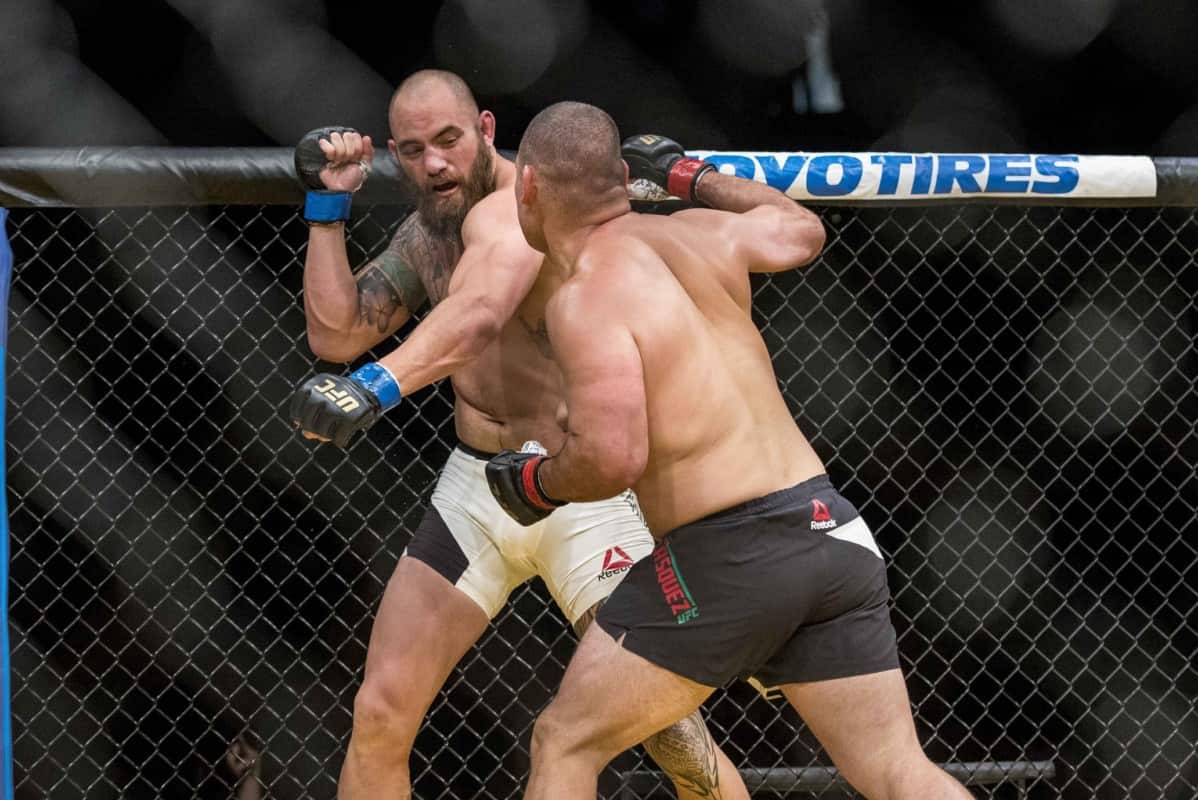 5. Cain Velasquez Is Back

Cain Velasquez made his return to the Octagon since dropping his title in dramatic fashion to now-former heavyweight champion Fabricio Werdum in their title bout in Mexico City last year with a thunderous statement victory against No. 7-ranked Travis Browne.

Velasquez out-struck the six-foot-seven Browne with ease, unleashing a spinning back kick on ‘Hapa’ that shocked almost all in attendance at the T-Mobile Arena before pounding out a victory over Browne in the closing seconds of the first round.

The Mexican phenom is on a quest to regain his heavyweight throne once more, as he awaits the winner of the upcoming title bout between current champion Stipe Miocic and Alistair Overeem at UFC 203 in Cleveland this September. Miocic is coming off of a shocking knockout win over Werdum in ‘Vai Cavalo’s’ home country of Brazil, while Overeem is riding high after finishing teammate Andrei Arlovski with a jumping front kick in the first round of their bout at May’s UFC Fight Night 87.

If Velasquez wants to regain the heavyweight title that he has held twice, he should have a tall order ahead of him regardless of who emerges victorious come UFC 203. 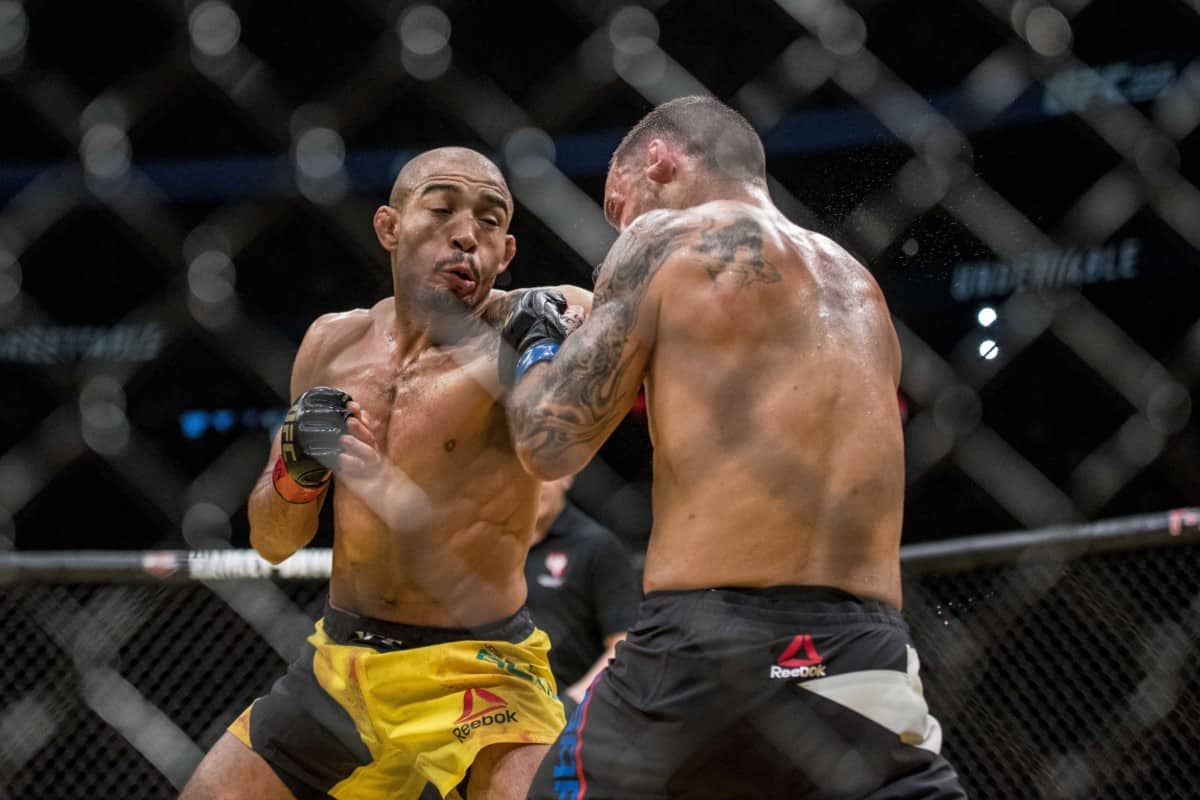 Coming off of a dramatic 13-second knockout loss to current UFC featherweight champion Conor McGregor at UFC 194 last December, Jose Aldo made his Octagon return against the surging No. 2-ranked Frankie Edgar for the interim featherweight title, a fight in which he masterfully and methodically hit the New Jersey native for five rounds.

Aldo, clearly a bit shaken about his recent KO loss, played it safe throughout the 25-minute contest as he eluded Edgar for the majority of the bout and landed powerful shots on counters in the process.

Following the bout, Aldo expressed his desire to face McGregor inside the Octagon next in hopes of unifying the two titles to once again sit atop the 145-pound division he ruled with ease for so many years. McGregor was sitting cageside for the contest, and will more than likely be taking on Aldo following the conclusion of his welterweight rematch with Nate Diaz at UFC 202 next month.

Aldo has a huge chip on his shoulder heading into a rematch with the man who took away his decade of dominance in a mere 13 seconds; will the second go-around be any different? 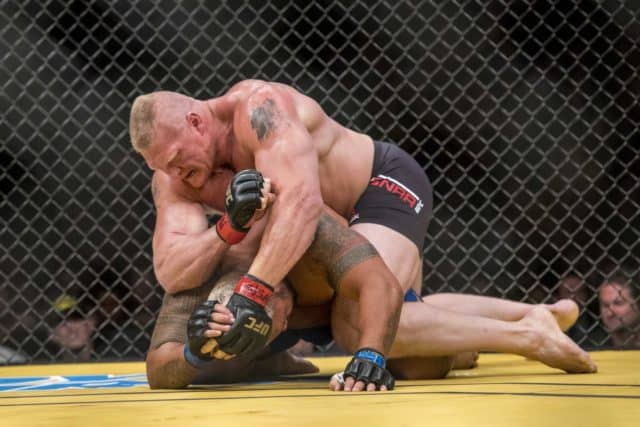 3. Brock Lesnar Is Still A Threat In The Heavyweight Division

After four-and-a-hal years away from the Octagon, former UFC heavyweight champion Brock Lesnar made his return to the sport in the co-main event of the biggest card of the year, and against one of the most dangerous strikers in UFC heavyweight history in Mark Hunt.

Lesnar did well to avoid any of Hunt’s potentially fight-ending haymakers, and also was able to capitalize on many of the opportunities ‘The Super Samoan’ presented him with a possible takedown. Once on the ground, there was hardly anything Hunt could do to get the massive Lesnar off of him, forced to eat ‘The Beast’s’ devastating ground and pound that has ended the likes of Frank Mir and Randy Couture in the past.

With Lesnar’s successful return to the Octagon after so long, the question remains if we will ever see the World Wrestling Entertainment (WWE) star under the company’s banner again.

If Lesnar returned after five years away and was able to defeat the No. 8-ranked heavyweight in the world, who’s to say he can’t do it to anyone who sits in the top five of the division? 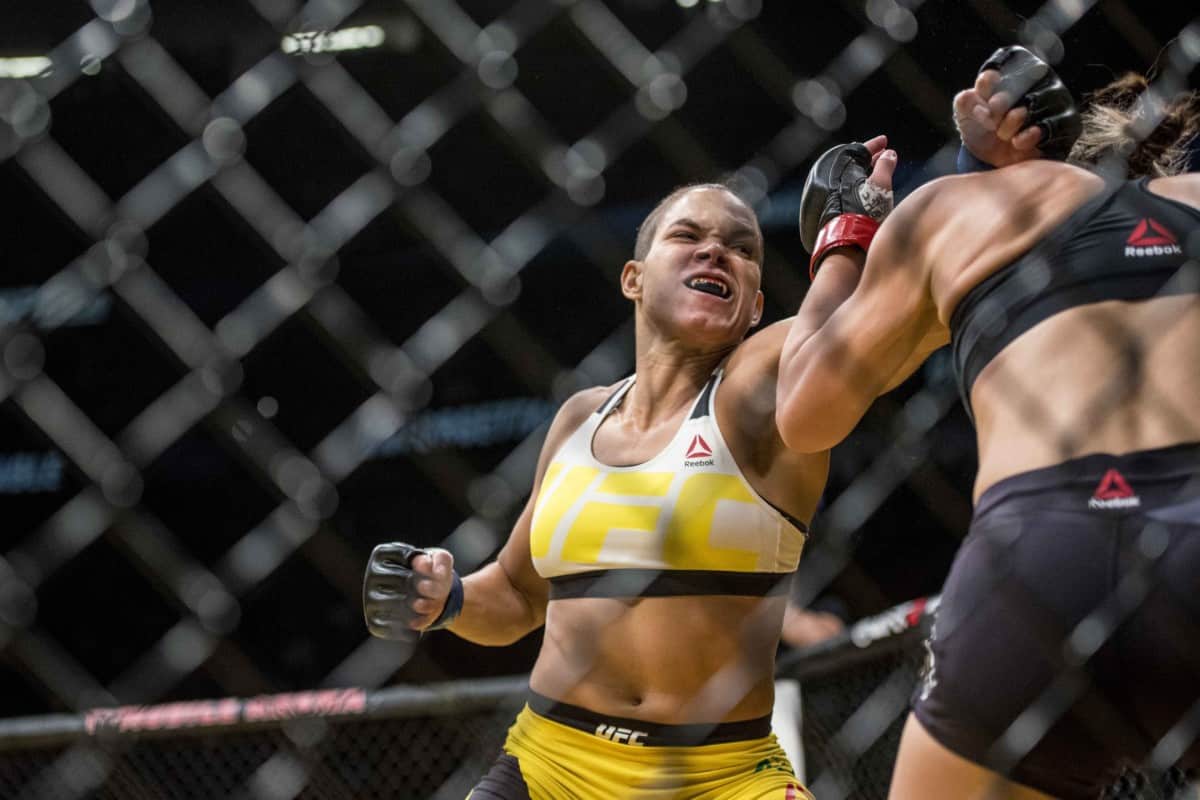 2. Amanda Nunes Is The Real Deal

One of the craziest outcomes of the night came in the form of the blitzing Amanda Nunes in the first round of her women’s bantamweight championship bout against Miesha Tate, battering the champion into oblivion to secure her first career UFC title.

Nunes was adamant in the months leading up to the title bout that she possessed all the right tools to dethrone ‘Cupcake’, and she certainly proved her point last night. Nunes’ devastating power proved to be too much for Tate to handle, as a few early clean shots landed flush on the champion’s chin and immediately stunned the champion.

The Brazilian would then lock on a suffocating rear-naked choke and force Tate to tap, losing the title she had won just four months before. Nunes has a world-class ground game with a black belt in Brazilian jiu-jitsu, as well as a brown belt in Judo to compliment the crushing power she holds in her hands.

The women’s bantamweight title has been victim to a game of hot potato as of late since the fall of former division queen Ronda Rousey. Has the title finally found a more permanent home with the surging Nunes? 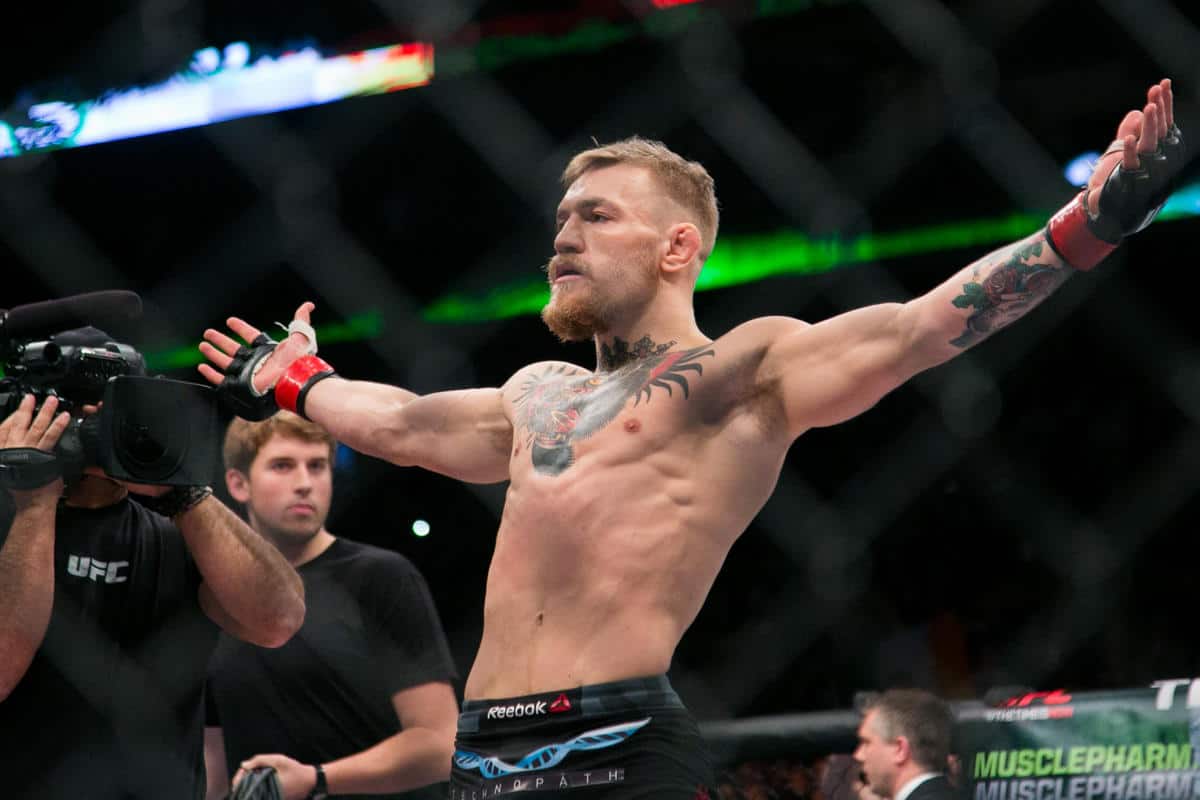 1. The UFC Should Have Left Conor McGregor On UFC 200

Aside from his over-the-top antics and brash, outspoken self-promotion, Conor McGregor is still one of the most reliable fighters to have ever stepped inside of the Octagon.

When the Irishman signs on the dotted line to make an appearance and compete under the UFC’s banner, he shows up. Not every man and woman currently on the UFC’s roster can say they share that rare quality.

When the UFC booked the rematch between McGregor and Stockton Native Nate Diaz as the main event of the colossal card, it was a good sign of great things to come for the ground-breaking event. Unfortunately, UFC President Dana White removed the Irishman from the card after McGregor opted not to go to a press conference for the event, despite all the media he had done for the promotion before.

Yes, he agreed to do all reasonable promotional activities for the vent, but based on the sheer amount of promtional work he had done through the entire booming 2015, you could see why the UFC perhaps could have given “The Notorious” a break based on the circumstances. He truly did and does need to train if he wants to have any shot of beating the much bigger, lankier, and more well-rounded Diaz in the rematch.

UFC brass attempted to save the main event by booking hated rivals Jon Jones and Daniel Cormier against one another in a light heavyweight title unification bout, and that worked fine and dandy until Jones was flagged for a potential USADA violation stemming form an out-of-competition drug test in June.

McGregor has never pulled out of a scheduled event before, and his counterpart Diaz is also almost a sure thing to show up come fight night as well. Many fans across social media took to Twitter to express a bit of disappointment at the event, and didn’t show as much interest in the main event as the promotion may have hoped.

It’s hard to argue the fact that the pay-per-view (PPV) that held so much promise in the eyes of MMA fans across the globe, would have been a bit more of a spectacle had the UFC’s biggest star competed against the man who handed him his first loss in nearly six years in the main event.

So in summation, UFC undoubtedly did great numbers at the box office. But with many labeling it a letdown – perhaps harshly – it’s tough not to wonder if they could have just swallowed their pride and let it have the big-fight feel of 2015’s UFC 189 to make 200 a truly massive event.