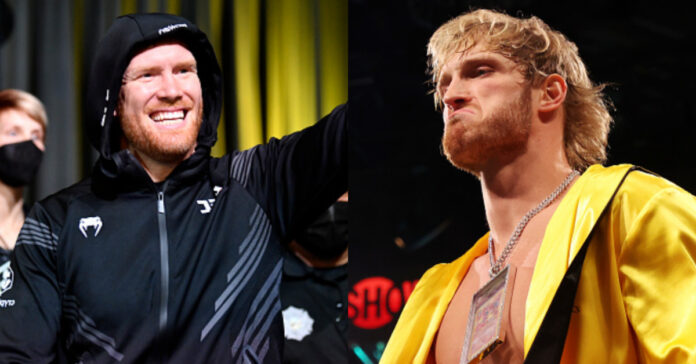 ‘Smilin’ Sam Alvey revealed that he had worked with Jake and Logan Paul years back during a recent interview with Ariel Helwani.

After nearly a decade of fights inside the Octagon, Alvey will look for a new home to turn his combat sports career around after setting a UFC record for most consecutive fights without a win. His most recent loss came at UFC Vegas 59 on Saturday when he suffered a first-round knockout by Michal Oleksiejczuk. Adding insult to injury, Alvey’s jaw was broken in the process.

Following his release, Alvey appeared on ‘The MMA Hour‘ with Ariel Helwani to discuss his UFC career and what may come next. During the conversation, the topic shifted to the ever-controversial YouTubers turned professional boxers, Jake and Logan Paul. Alvey revealed that years back, he had been brought in by the social media stars to spar with them.

“Before their first fight, they invited me to come out and help them train, so I helped spar with Logan Paul. Yeah, this would have been five years ago, six years ago. Something like that. I ended up meeting up with their boxing coach standing in line for an MMA Junkie award something and his boxing trainer and I, we split messages and they brought me out to help them train for a day. I got to spar with Logan Paul and it was a lot of fun. Logan seemed like a good dude. I wasn’t crazy about Jake, but it could have just been the day.”

Pressed by Helwani to give his true feelings about working with Jake Paul, Alvey gave us his honest impression while also revealing that he nearly injured Logan Paul during the sparring session.

“He was a douche. He was. He was a douche. Logan Paul seemed okay. Logan, I actually almost broke his jaw in the sparring session. I was doing the best I could to carry him, to just be a training partner for him, throw something and he just kept getting hit. At one point he kinda fell back.

“I was supposed to spar his brother too. Jake wouldn’t do it afterward. I said, ‘Jake, I’ll take it easy, I’ll give you whatever work you want,’ but Jake wouldn’t spar me that day. I was never invited back.”

While Complimentary of Logan Paul, Sam Alvey Simply Does Not Like Jake Paul

When asked by Ariel Helwani if he wanted to fight Jake Paul just for the exposure or the big payday, Sam Alvey was nothing short of frank in his response.

While many within the combat sports community seem to agree with Alvey’s sentiments, there is no doubt that a boxing match with Jake Paul would result in a significant payday for the newly released middleweight.

Paul was previously scheduled to face Tommy Fury, brother of heavyweight world champion Tyson Fury this month, but Fury was denied entry into the United States throwing those plans into disarray. Stepping up to take his place was Hasim Rahman Jr. A well-established boxer with a 12-1 record, Rahman Jr. looked to be Jake Paul’s first true test in the square circle. Unfortunately, the fight was canceled just days out as Paul and Most Valuable Promotions claimed that Rahman Jr. was nowhere near the agreed-upon weight leading up to the fight.