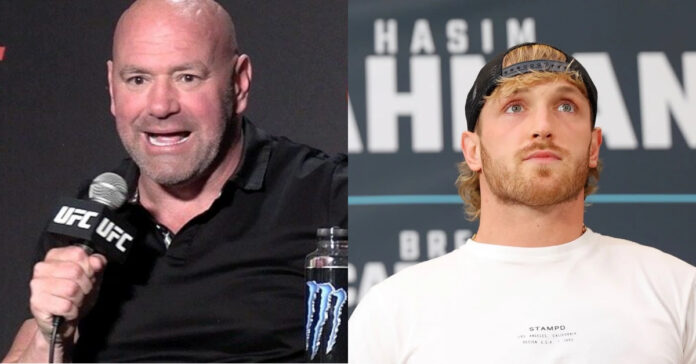 Dana White has shared a story of the time he had to save Logan Paul from being beaten up.

YouTube icon Paul was in attendance at the trilogy outing between Conor McGregor and Dustin Poirier at UFC 264 in July last year. The company president White was forced to step in and help Paul out of a risky situation.

Dana White saved Logan Paul from getting ‘smashed’ at UFC 262

In an appearance on the Full Send podcast with the NELK Boys, White recounted upgrading Paul to ‘Billionaire’s Row’ where former President Donald Trump and other VIPs were seated just so he could save him from getting beat.

“He bought a bunch of tickets to the fight, and the tickets he bought were not tickets he’d want to sit in,” White said (ht talkSPORT). “He was going to get smashed. So I put him over in another section.”

It’s no surprise that the Paul brothers aren’t massively popular in the mixed martial arts community who constantly boo the duo whenever they appear on the big screen at live events. Jake reportedly needed to have bodyguards with him when he was attending Charles Oliveira’s crowning moment against Michael Chandler at UFC 262 in May 2021.

Paul has remained respectful of White

Having taken on the undefeated boxing Hall of Famer Floyd Mayweather in an exhibition boxing match, Logan chose to keep away from combat sports competition and move over to the WWE. Jake, his younger brother, has been at odds with the UFC head making things a bit more complicated for Logan.

White dismissed the possibility of the Paul brothers faring well inside the octagon, claiming that they would “get murdered.” However, this didn’t hold Logan back from praising White and his promotion.

“I’ve come out publicly and said I love Dana White, always have, always will. He’s a ruthless businessman, the head honcho, but I’m not sure how he feels about me.

“By default, my relationship with my brother will always take precedence but, if I can be cool with someone, I will.”