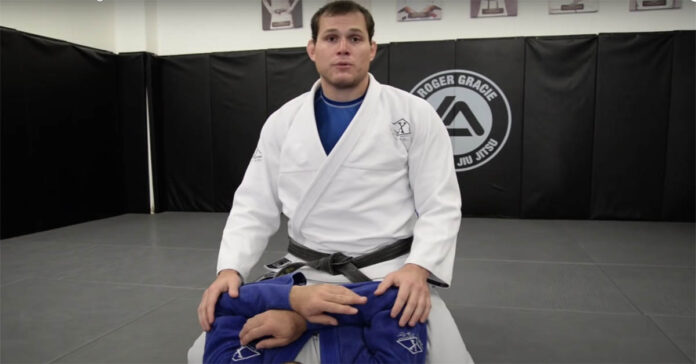 Before Gordon Ryan became the king of grappling, the person that everyone considered the best modern grappler was Roger Gracie. Roger created an incredible legacy in Jiu Jitsu that will never be duplicated.

Here is the full story on Roger Gracie and how he became one of the all-time greats. Going over his domination in the sport of Jiu Jitsu, transitioning to MMA, and opening his own academy.

Roger Gracie Growing Up in the Gracie Family

Roger was born into the Gracie’s, who are the founding family of Brazilian Jiu Jitsu. His mother, Reila Gracie, the daughter of Carlos Gracie Sr. and his father, Mauricio Gomes. A black belt under the late Rolls Gracie.

Being a Gracie, Roger was born on the mats and would go into the family trade. Although, Roger wasn’t fully committed to Jiu Jitsu until he was a teenager.

He credits training with his uncle, Rillion Gracie in southern Brazilian for giving him the focus to become a BJJ athlete. But an issue with Brazilian police would force Roger to leave the country for a short time.

Forcing him to leave his father, Mauricio Gomes in London for a short time. Despite the change of scenery, Roger would continue training with his father.

After the heat in Brazil dissipated, Roger would return to Brazil and continue to train under Carlos Gracie Jr.

As expected, Roger dominated the lower BJJ ranks from blue belt to brown belt. Winning world championships at all three of these ranks and double gold at brown belt before his black belt promotion.

His uncle and teacher, Carlos Gracie Jr would award Roger with his black belt in 2004.

Roger would begin his domination in 2004. He would cruise to winning his first world BJJ title in 2004.

Winning in the super-heavyweight division and coming up just short of double gold. Losing to another legendary athlete in Ronaldo “Jacare” Souza by points.

This was one title earned with several more on the way in the coming years.

In 2005, Roger would take his second shot at winning an ADCC championship. He first competed for ADCC when he was a brown belt and would earn bronze in the 99+ kg division.

Roger would put on one of the all time great performances in ADCC history that year. He fought eight opponents and submitted eight opponents to win double gold at the tournament.

The very first athlete to accomplish this feat in the history of the organization. This performance cemented Roger as the greatest grappler of his era.

Roger would follow up his ADCC performance with another stellar performance at the 2005 IBJJF World Championships. Earning another gold medal in the super heavyweight division and submitting six of his eight opponents.

In 2006, it would be the same story for Roger. He would dominate nearly all of his opponents and win his third world title in the super heavyweight division.

The only blemish was that he was once again thwarted from winning double gold at worlds for a third time. Gracie’s old rival Alexandre Ribeiro, who he beat multiple times before would beat him in the absolute finals.

After being denied of winning double gold in his first three tries, Roger would not be denied in 2007. He would finally get over the hump and earn double gold at worlds. Submitting seven of his eight opponents on the way to winning both the super heavy and absolute divisions.

This first double gold performance would be the beginning of an unbelievable streak for Roger. After being denied of double gold again in 2008 by Alexandre Ribeiro, Roger would win double gold in 2009 and 2010.

In 2009, he won all six of his matches at the world event by submission. Four cross chokes and two Ezekiel chokes.

Gracie competed in his last BJJ championship event in 2010. Putting on another spectacular performance by submitting seven of his eight opponents.

While Roger was winning BJJ championships, he did dabble in MMA. Winning two matches by submission against MMA veterans Ron Waterman and Yuki Kondo.

After retiring from IBJJF competition in 2010, Gracie would transition to MMA full-time. Signing  with promotion Strikeforce to a multi-fight deal.

His first match would be a successful debut by submitting MMA legend Kevin Randleman by RNC. He would follow this win up with another submission win over Trevor Prangley.

In his third fight with Strikeforce, Roger would taste one of the rare defeats in his athletic career. Muhammed Lawal would knockout Roger in the first round of their bout.

Roger would bounce back with two wins against Keith Jardine and Anthony Smith before Strikeforce was bought by the UFC. He would fight one time in the UFC, which would be a loss to Tim Kennedy.

Roger Gracie in ONE Championship

After his one and only fight in the UFC, Roger would sign a lucrative contract with ONE Championship. Debuting for the promotion in the Philippines in December of 2014.

His ONE debut one was a successful one as he beat UFC vet James McSweeney by TKO. The only TKO win of his career.

Roger’s last MMA bout would be a submission win against Michal Pasternak. Winning the inaugural ONE Cruiserweight Championship in 2016, which would later be rebranded as the light heavyweight championship.

After this bout, Roger would announce his retirement from MMA competition. Finishing his MMA career with a record of 8-2.

While Roger retired from IBJJF competition in 2010, he did compete in a handful of superfights afterwards in the 2010s. Fighting another BJJ legend in Marcus “Buchecha” Almeida at the inaugural Metamoris event in 2012.  Also beating Rodrigo Comprido in a superfight at a UFC Expo event in 2015.

In 2017, a year after retiring from MMA, Roger announced he was having a retirement match in BJJ. Competing against Marcus Buchecha in a superfight at a Gracie Pro event.

It was also a match to settle their previous match that ended in a draw. In their bout, Roger proved why he was one of the greatest BJJ athletes of all time.

For the first eight minutes, the two would grip fight from standing until Roger finally pulled guard and hit a sweep. He immediately went to Buchecha’s back and grabbed hold of his collar.

Quickly locking in a choke and forcing Buchecha tap. The crowd went wild as Roger won by submission in his final bout.

He was carried off the mat on the shoulders of his teammates as he said goodbye to the fans.

Once Roger officially retired from athletic competition, he would move back to London. A place he’s always been passionate for and wanted to open an academy in.

He would realize his dream of opening an academy in London along with his father. Roger has built his academy into one of the best academies in the city. Also helping the UK become a hub for Jiu Jitsu within Europe.

Roger Gracie is a master of old school Brazilian Jiu Jitsu. Everything Roger does is textbook fundamentals with no wasted movements.

Even though Gracie’s game consists of basic techniques, he does all of them to perfection. His technique is flawlessly perfect and mixed with his athleticism was a recipe for an all-time great BJJ athlete.

All of Roger’s past opponents will attest that competing against him was one of the most difficult tasks in their careers. They knew what he was going to do, but they couldn’t do anything to stop him. He was just that good.

The Legacy of Roger Gracie

No athlete in the history of Jiu Jitsu has been as dominant as Roger Gracie was during his prime. Roger didn’t just win, but submitted the majority of his opponents. Giving him the highest submission rate of any grappler in the history of the sport.

He is no doubt one of the greatest BJJ athletes to ever live and a credit to the martial art. Proving the power of fundamental BJJ every time he stepped on the mat or in a cage.