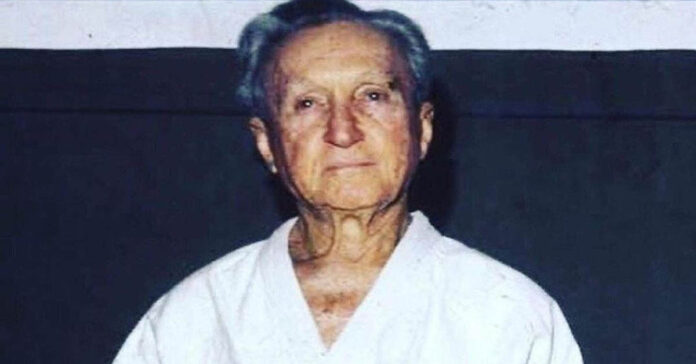 Grandmaster Carlos Gracie was one of the pioneers responsible for creating Brazilian Jiu Jitsu. He worked for decades to build up the martial art and prove its legitimacy to the world.

Here is the story of Grandmaster Carlos Gracie. Starting from how he was inspired to first learn Judo and then went on to help co-create BJJ.

Carlos Gracie grew up in Belem do Para, Brazil and was the son of Brazilian businessman Gastao Gracie. Being the oldest of nine siblings

His father, Gastao, was searching for an activity that would help his son focus and put his energy into something positive. Gastao would take Carlos to a stage show that featured a famous Japanese Judo practitioner nicknamed Conde Koma (Count Combat).

Conde Koma’s real name was Mitsuyo Maeda, and he was actually a friend of Gastao Gracie. Maeda immigrated to Brazil with the help of Gastao and helped set up public Judo demonstrations.

The young Gracie was mesmerized as the smaller Maeda easily threw around bigger opponents. After the show, the Gracies approached Maeda about the possibility of Carlos becoming his student.

Maeda took a liking to Carlos and accepted him as his student.

Gracie would train under Maeda for three years, learning Judo from him and his assistant Jacyntho Ferro. During this time, there would be pauses in the training as Maeda had to travel for work.

But when Maeda had a class, Carlos was there soaking up everything he could about Judo. He would become one of Maeda’s most dedicated students.

Carlos would be forced to stop training with Maeda after three years. His family went bankrupt and was forced to move from Belem to Rio de Janeiro.

His father, Gastao, would open a casino, and Carlos worked as a bouncer for a short time. The two had a bad relationship which led to Carlos quitting and separating from his family.

He would find work doing small jobs but would soon return to training.

While working small jobs, Carlos would contact another student of Maeda’s named Donato Pires dos Reis. Donato was working as a self-defense instructor for the special police in Rio.

He invited Carlos to come train with him, and Carlos jumped at the opportunity. This would be the first formal training the young Gracie would receive without any interruptions.

Reis would show Carlos numerous techniques using jujutsu for self-defense. Including numerous submission holds and takedowns. Carlos would become immersed in training and wanted to learn everything about grappling.

Carlos would take what he learned from training and teach it to his brothers so that they could train together. The common story is that he taught his brother Helio, but he taught all of his brothers.

Oswaldo and George being the first two, he would later allow younger brother Helio to participate. While training together, they began tweaking the techniques to make them more ground-based.

Using an early form of the guard to fight off their back, sweeping their opponents, and submitting them. Many of the techniques they took were ground techniques from Judo called “newaza.”

After saving up money, Carlos was able to rent a space and opened a Jiu Jitsu school. It was located at Rua Marques de Abrantes, number 106 in Jacare.

The most common year cited when the school opened in 1925, but some historians say it was in 1929/1930. Either way, the address above is the confirmed location of Carlos’ school.

Carlos would even take an ad out in a local paper to promote the school. “If you want your face punched and bruised, your but kicked and your arms broken, talk to Carlos Gracie at the following address.”

Carlos would begin challenging other martial artists to make a name for himself and the martial art he helped create. The first person he would challenge to a fight was Japanese Judoku Geo Omori. A famed martial artist and fighter who also had a hand in creating BJJ.

At first, Omori blew off Carlos but eventually participated in two exhibition matches with him. It was said that Omori agreed to the fights as a favor to Carlos’ father.

After these exhibitions, Carlos would have one documented fight shrouded in controversy. A sportsman and wrestler named Manoel Rufino dos Santos criticized the Gracie family’s legitimacy.

Due to this criticism, Santos and Carlos Gracie would set up a match. Before the fight, Carlos’ teacher Donato Pires took umbrage with his students’ claim of being a direct students of Maeda.

From written accounts of their fight, Santos would be offensive and keep Carlos defending from his guard. This would go on for the first two rounds of the fight until Santos passed Gracie’s guard in the third.

He would attempt a submission on Carlos, but Gracie would leave the ring to avoid being submitted. When the match restarted, Gracie tried to lock in a guillotine.

The referee separated them, but Carlos claimed that Santos submitted. After the referee consulted with the judges, the match restarted, but Carlos refused to fight. Claiming that he won and Rufino was then declared the winner by the judges.

After the bout, Manoel Rufino was even more critical of Carlos Gracie’s skills. This would lead to Carlos, George, and Helio assaulting Rufino at the Tijuca Tênis Clube on October 18th, 1931.

The brothers would break Rufino’s arm and later be arrested on assault charges. They were arrested and sentenced to 2.5 years in prison but were pardoned by the Brazilian president. A friend of the family.

After the Rufino fight and the chaos that followed, Carlos stepped away from fighting. He would turn his focus on teaching, promoting fights for his brothers and various businesses he had.

For decades, he was the advocate for his brothers that would try to get them fights and promote them. Carlos would be in their corner coaching any time his brothers fought.

Throughout his life, he would be bedridden with various illnesses that would keep him from training. He began doing research and found that the cause of his poor health was his diet.

The ailments that kept him in pain had subsided, and he was full of life. Carlos would immediately force his family members to adopt the diet that had improved his health.

Gracie’s diet would, of course, be called the Gracie Diet. Future generations of the Gracie family would also adopt the diet.

Rorion Gracie would publish the Gracie Diet, which became a bestseller.

When developing Gracie Jiu-Jitsu, wrote down specific rulers for martial art practitioners. They would later be known as Carlos Gracie’s 12 Commandments For Jiu Jitsu.

These are the sons of Carlos Gracie Sr. that received black belts from their father.

The Legacy of Carlos Gracie

Without Carlos Gracie Sr. and his brothers, Brazilian Jiu Jitsu may not have existed, let alone Gracie Jiu-Jitsu or the UFC. Grandmaster Carlos Gracie is responsible for playing a major role in creating what would become a globally practiced martial art.

If Carlos Gracie did not help develop modern Jiu Jitsu, the martial arts world would look a lot different today.