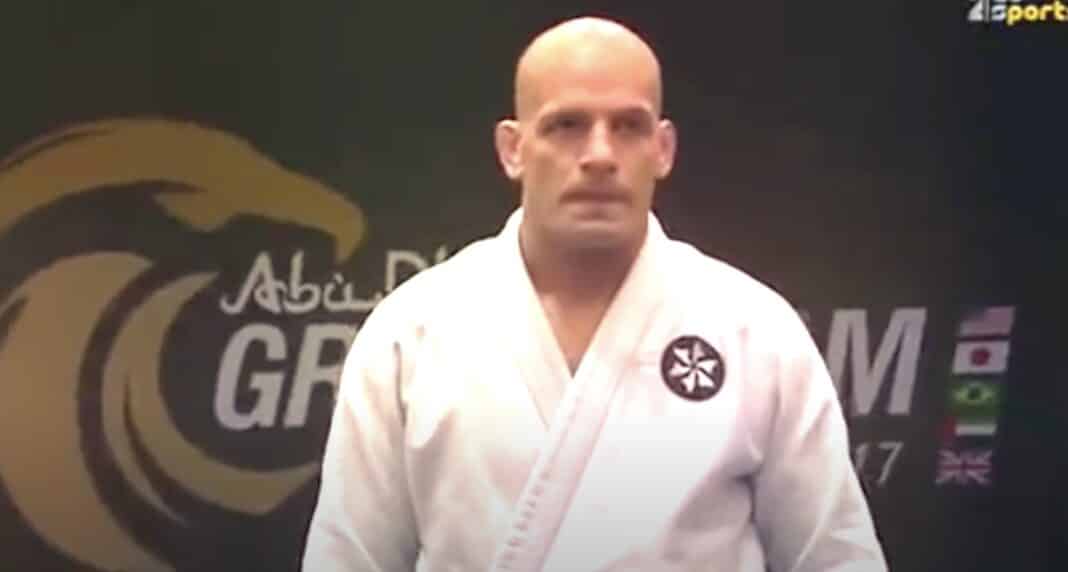 Alexandre “Xande” Ribeiro grew up in Manaus, Brazil and began his BJJ training when he was 10 years old. His first professors were the famous Monteiro brothers Guto, Binho, Yano, and Lucio.

From the first time Xande stepped on a Jiu Jitsu mat, he was obsessed with the martial art. He would start competing within his first year of training and hasn’t stopped for over 30 years.

Ribeiro would train with the Monteiro brothers for 7 years. In that time, he won every major Brazilian title within the kid and teen divisions.

Only losing an alleged 2 times in those 7 years. Also apparently only getting his guard passed and mounted once during this time.

At 18 years old, Ribeiro would move from Manaus to Rio de Janeiro to pursue a law degree. He would also join his older brother Saulo and train with him at the Gracie Academy.

Their instructor was multiple time world champion Royler Gracie. Saulo was already becoming a recognized name in Jiu Jitsu, while training with Royler.

In his first two years training at the Gracie Academy, Xande would win the Pans and World Championship back to back. Winning at purple belt his first year and then brown belt in his second year.

After winning his first major BJJ titles 2 years in a row, Ribeiro’s brother Saulo awarded him with his black belt.

Xande Ribeiro moves to the US

After winning two world titles and earning his black belt, Alexandre and his brother would make a big decision. They decided to move to the US to train and make a name for themselves there.

They would spend the first 5 years living and training in Toledo, Ohio. Slowly building their empire from the ground up.

Fresh off of getting his black belt, Alexandre would have quick success at the highest level of competition. Winning his 3 Pans title in three years.

Unfortunately for Ribeiro, this would be the only major title he would win for the next two years. In 2002, he came up short of winning any major Jiu Jitsu titles.

After winning a few Grapplers Quest matches, Xande would compete at his first ADCC tournament in 2003. He would win his first two matches, which included beating legends Erik Paulson and Dean Lister.

But Xande’s bad luck would continue and he would lose in the semi finals. Also losing in the bronze medal match against Roger Gracie.

After a disappointing first 2 years at black belt, Xade Ribeiro would start finding success in 2004. Starting the year off to win double gold at the Brasileiro. Beating Jefferson Moura and the legend Marcelo Garcia.

Xande would win his first world title at black belt by beating Jefferson Moura again. Then he would end his 2004 run by winning a World Cup in the heavyweight division.

When 2005 came around, Ribeiro would continue to build upon the success he had in 2004. Winning at the World Cup in 2 divisions, 2nd place at Pan/Worlds, and 3rd place at ADCC 2005.

2006 would prove to be one of the best years of Xande’s young career. Ribeiro would win gold at Pans, then win double gold at the IBJJF World Championship.

Finally beating Roger Gracie in the absolute finals and submitting Cyborg Abreu in the semi finals. Proving that he was the best grappler of that year.

Alexandre and Saulo move to California

In 2007, Alexandre and his older brother Saulo decided to make the move to San Diego, California. They would open their own Jiu Jitsu school called the University of Jiu Jitsu.

They built their academy based on the fact that it was a place open to all affiliations. Any person from any gym could come train and learn at the gym free of Jiu Jitsu politics.

This concept led to the gym being successful rather quickly. For the last two decades, the Ribeiro brothers built a successful gym that turned into an affiliation.

The affiliation would be called the Ribeiro Jiu Jitsu Association and have academies across the world. One of their most notable students is Rafael Lovato Jr, who owns his own affiliate school in Oklahoma.

Xande Ribeiro would make his 3rd appearance at the ADCC Championship in 2007. He came up short in his first two appearances, but the third time would be the charm for him.

His first two wins would be by submission before meeting former world champion Robert Drysdale in the semi-finals. Ribeiro would beat Drysdale by points to meet world champ Braulio Estima in the finals.

Xande would have one of the best No-Gi matches of his life and beat Braulio by points. Earning him his first ever ADCC gold medal.

To follow up his first gold medal at ADCC, Xande would win his 4th world title at black belt. Beating big names like Flavio Almeida, Cyborg Abreu, and Andre Galvao.

Ribeiro would follow up his championship win with another phenomenal showing in 2008. Yet again winning double gold at the world championship for a 2nd time. Beating his rival Roger Gracie for a third time in the absolute finals.

In 2008, Xande would make the transition to MMA and have a short career in the sport. Signing a two fight contract with the Japanese promotion World Victory Road.

His first fight would be Sengoku 5 in Tokyo, Japan against Takashi Sugiura and winning by TKO in the 3rd round..

Then in 2009, Ribeiro would have his 2nd and last MMA fight at Sengoku 8. Beating Keiichiro Yamamiya by KO in the 3rd round.

Ribeiro would retire and go back to competing in BJJ.

After fighting in MMA, Xande would come back to compete at ADCC 2009 and look to repeat as champion.

He would again perform at his best at this tournament. Beating UFC vet Ilir Latifi in the opening round and Vinny Magalhaes in the semi finals.

Ribeiro would beat Gerardi Rinaldi in the finals to capture his 2nd ADCC gold medal. In the absolute division, Xande would also earn a silver medal.

In 2012, Alexandre Ribeiro had already accomplished just about everything he could in Jiu Jitsu. The only world title he had yet to win was an IBJJF No-Gi World Championship.

He would look to change this at the 2012 No-Gi World Championship. Entering in the heavyweight division.

Ribeiro would win his first 2 matches to meet Joao Assis in the heavyweight finals. After a tough match that ended in a tie, the referee awarded the match to Xande. Earring his first ever No-Gi world title.

Although Xande was not done yet as he would enter the absolute division. There he would beat Bernardo Faria in the semis to meet Leandro Lo in the finals. Winning the match by advantage to earn double gold in his first and only appearance at this championship.

Throughout the 2010s, Ribeiro would stay busy and continue competing frequently. Winning one more world championship and medaling at various other events.

During this time, the years of training were starting to catch up to Xande. In later 2018, he would have major surgeries that he had been putting off for years.

At 38 years old nobody knew if Xande would be back or if this was the end of his competitive years.

After taking 2019 off to deal with injuries, Xande would make his comeback in 2020. Competing on F2W 145 in Austin, Texas against Gabriel Almeida.

He would win his comeback by armbar and make a huge announcement that shocked the Jiu Jitsu world. He was going to leave the academy and affiliation that he and Saulo created to make his own academy.

Ribeiro’s academy would be called Six Blades Jiu Jitsu and would open in Austin, Texas later that year.

Alexandre “Xande” Ribeiro has lived and breathed Jiu Jitsu for the past 30 years. He has won every major championship multiple times and opened his own successful school and affiliation.

Now that he has set out on his own and injury free, Xande is starting a new chapter in his life. Looking to create another successful Jiu Jitsu academy and continue to compete at the highest level.