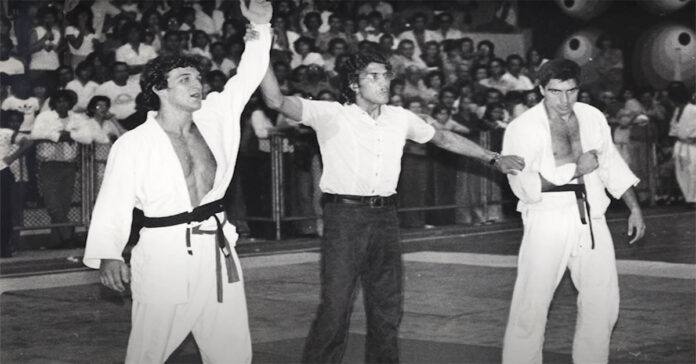 Rolls Gracie was considered the best grappler of the Gracie family, revolutionizing the martial art. He made a huge impact on Jiu Jitsu and grappling as a whole, changing how the martial arts are trained.

Here is the important story of Rolls Gracie and how he changed the BJJ world. Going over how he influenced his students to cross-train in wrestling, various stories, and his tragic death.

Rolls is the son of Carlos Gracie, but he was actually partly raised by his Uncle Helio. His father, Carlos, had numerous children, and Rolls was a result of an affair Carlos had. Helio was in his second marriage, and his wife Margarida couldn’t have children.

Like most in the Gracie family, Rolls was raised on the Jiu Jitsu mat. From the time he was a toddler, Rolls was on the mat playing and learning small techniques.

He loved Jiu Jitsu and wanted to do everything he could to improve his skill. When he got older, he began competing in the kid’s divisions. Going on to win every single competition that he could during his time.

By the time Rolls was around 20, he wanted to expand his grappling ability as a whole. He began branching out and learning other grappling techniques to supplement his Jiu Jitsu.

Rolls would first begin learning Judo under family friend Osvaldo Alves. Osvaldo Alves was one of the best Judokas in Brazil during this time.

After spending five years training at the Kodokan in Japan, Alves won two Judo Pan Am Championships. He was also an expert in Judo ground attacks called newaza which he would show Rolls and other Gracie family members.

He quickly became friends with Anderson and invited him to stay in Rio de Janeiro to teach wrestling. Bob would teach Rolls numerous No-Gi takedowns that Rolls would pass on to future students.

There was already wrestling in Brazil, but Bob Anderson’s time teaching Rolls would have a huge influence. Rolls would instill the importance of having solid wrestling skills to his future students and not relying on just Jiu Jitsu.

One funny story about the two is when Anderson first met Rolls. He could not believe that Rolls had won the open-class division at the Brazilian wrestling championship.

Rolls offered to spar Anderson and would submit the larger wrestler numerous times in a short time span. Bob could not believe how good Rolls was and gave him the utmost respect after they rolled.

Much like the legend of Rickson Gracie, Rolls Gracie was said to have never lost a match in Jiu Jitsu competition. He beat literally everyone he could during his era and won every major championship.

Most of the matches weren’t competitive, so Rolls would later just accept challenges for super fights. From 1973 to 1977, he had four different super fights against much larger opponents.

The only opponent Rolls didn’t submit in his competition career was his last one. He competed against a Judoka named Paulo Boca, a Judo champion weighing 90 kg.

In the match, the two competitors exchanged takedowns before Rolls pulled guard. Boca stayed defensive, which led the referee to give the match to Rolls for being offensive.

Since Rolls didn’t have any competition in Jiu Jitsu, he began competing in wrestling and sambo. In Brazil, he would win the Wrestling Brazilian National Championship in both his division and the absolute division.

Rolls would also begin competing in Sambo since he had already trained in both Judo and submission wrestling. He would qualify for the Pan American Championship in 1979, which was held in San Diego, California.

Once again, Rolls would win gold in both his division and the absolute division. Later that year, Rolls would return to San Diego and compete in the San Diego Wrestling Pan Ams.

During this stay, Rolls was offered a job by the LAPD to teach them self-defense. Unfortunately, his Uncle Helio ruled against it as his son Rorion was already teaching in LA. If Rolls had stayed, it would have certainly changed the history of Jiu Jitsu.

Rolls Gracie Goes For The Olympics

In 1980, Rolls attempted to make the Brazilian Wrestling team. He wanted to compete at the 1980 Olympics in Moscow.

While Rolls’ abilities were unquestionably worthy of being on the team, he didn’t make it. He was met with bureaucracy and an unorganized committee. The fact that Rolls was a Jiu Jitsu practitioner may have also played a part in not getting on the team.

Since he wasn’t allowed to compete, Rolls got his own team together for the 1980 Pan Am in San Diego. He would earn a bronze medal at this event, which would be the last time he competed.

Rolls Gracie’s Journey To Opening His Own Academy

Rolls first began teaching Jiu Jitsu in the original Gracie Academy under his Uncle Helio Gracie. Although, friction developed between the two as they had different philosophies on Jiu Jitsu and training. Helio also favored his sons over Rolls, which created problems.

Rolls would then want to go out on his own and open his own academy. His brother, Carlson, gave him his blessing, and Rolls would go on to open his academy.

Needing help to run his academy, Rolls called upon his younger brother Carlos Gracie Jr. to help him. Since the academy was near Carlos’ university, he accepted Rolls’ offer.

The academy would find a lot of success until his sudden passing in 1982.

Even though Rolls died young, numerous stories involving him are still told to this day. Here are some of the most known and talked about.

There was one time when a Karate school challenged the Gracie Jiu-Jitsu school to a fight. Rolls was chosen to fight the Karate school’s instructor. He easily took down the instructor and submitted him in under two minutes.

Rickson Gracie famously fought the larger and undefeated Zulu when he was eighteen. Helio actually volunteered Rolls to fight Zulu, but Rolls suggested Rickson fight him to prove himself.

Rolls would be in the corner of Rickson for his first fight and actually motivated him to win the fight. Citing, he would kick Rickson’s ass if he didn’t win the fight and fight like he knew he could.

Rolls Beats Up a Famous Surfer

Rolls had a student named Mario Gomes, who later became the star of many Brazilian novelas. One day, Gomes came to class discouraged. Telling Rolls that a famous surfer named Daniel Sabba and his friends had kicked Gomes off Arpoador beach.

Gracie would later go to the beach with a group of students to discuss the issue. Sabba and his friends immediately tried to fight Rolls and students and were quickly put to sleep.

This event led many surfers to start training with Rolls at his academy.

Rolls and the BJJ vs Luta Livre Saga

He embarrassed the Muay Thai instructor. These events are what kicked off the violent BJJ vs Luta Livre clashes during the 1980s and 1990s.

What made Rolls such a fierce competitor was his strength and conditioning routine. Along with his Jiu Jitsu training, Rolls also practiced gymnastics, various calisthenics and was an avid surfer.

He wanted to strengthen his body the best he could for competition while using his body’s natural movements. Rolls’s importance on strength and conditioning would influence his younger family members.

Particularly Rickson Gracie, who is famous for using ginastica and yoga for his strength and conditioning.

In 1982, Rolls Gracie died from a tragic hang-gliding accident at only thirty-one years old. His death broke the hearts of the Gracie family and left his two sons without a father. It has been forty years since the death of Rolls, and he is still deeply missed by his family.

Rolls had three sons before he died. Rolles Gracie Jr, Gregor Gracie, and Igor Gracie. They all followed in their father’s footsteps, becoming BJJ black belts, fighters, and later instructors.

Before his death, Rolls Gracie gave five black belts to five of his original students. These five students were given the nickname “the famous five.”

Rolls actually gave a sixth student their black belt named, Mario Claudio Tallarico, before his death. He was also technically the teacher of Carlos Gracie Jr and Crolin Gracie. But as in Gracie family tradition, Helio Gracie promoted them to black belt.

The Legacy of Rolls Gracie

Rolls Gracie only lived for thirty-one years but was able to reach legendary status. He was arguably one of the best BJJ practitioners of all-time and heavily influenced future generations.

Encourage everything from cross-training in other forms of grappling to promoting the importance of strength and conditioning.

His younger cousin, who Rolls influenced, had a great quote about him. “There is an era before Rolls and one after him.”