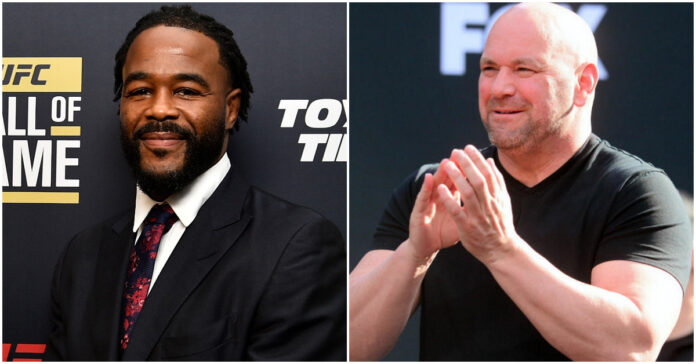 The longstanding dispute between Dana White and heavyweight champion Francis Ngannou has been in the public eye more than ever this week and one former fighter shared his thoughts on the issue.

On a recent episode of the PBD Podcast, Rashad Evans came to White’s defense saying that the UFC President is a very generous guy and treats his champions well despite what people may think. Evans credited White for his straight shooter approach, he said.

“I don’t always gotta like what somebody say but if they kind of shooting straight from the hips, then I can accept that and Dana’s one of those guys.” (transcribed by Sayan Nag, Sportskeeda)

Rashad Evans Believes Francis Ngannou Should Have Been Paid More

While Evans praised the UFC President for being an all-around good person, he did admit that he believes Francis Ngannou should have been paid more than $600,000 for his recent title defense against Cyril Gane.

On the topic of Ngannou switching to boxing for a lucrative payday against Tyson Fury, host Patrick Bet-David asked Evans if he thought White cared about losing ‘The Predator’. Evans said that he believed Dana does care and is aware of the value he has in Ngannou.

“When you have a heavyweight that can do what Francis does, it just makes the whole league look better. You know, there can be a lot of great fighters in different weight classes but heavyweight just says something. You know, the baddest man in the world just has to be at heavyweight.”

Meanwhile, the status of Ngannou’s future in the UFC remains less clear than ever before as he is still without a contract and is receiving threats of a lawsuit from the promotion.

Do you believe Rashad Evans when he says Dana White is a straight shooter?