LowKickMMA.com
Home UFC News Rafael dos Anjos reveals that something wasn’t right leading up to his... 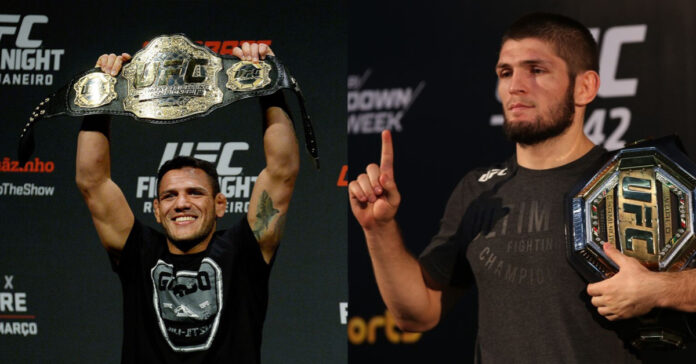 Rafael dos Anjos (30-14 MMA) has recently declared a big mistake he made before taking on Dagestani native Khabib Nurmagomedov (29-0 MMA).

RDA has been registered as a UFC fighter since getting signed back in 2008. Since then, he has developed into one of the most polished veterans in the game, with notable wins over the likes of Nate Diaz, Anthony Pettis and Benson Henderson.

Despite the success, dos Anjos has come across many challenges and obstacles to becoming a UFC Champion at 155lbs, including one against one of the modern-day GOAT’s, Khabib Nurmagomedov.

The fight took place in April 2014, where ‘The Eagle’ was able to exploit his wrestling acumen as he controlled much of the fight on the ground which helped lead him to a unanimous decision victory.

Although it is well known that Nurmagomedov’s main asset is his high-tempo wrestling, Dos Anjos – despite his high-level Jiu Jitsu – has revealed that he was unable to even train his grabbling at all for the fight.

“In that fight specifically, I was training with Benny in the cage just us sparring. When we got close to the cage my ear got stuck in the cage, I got 14 stitches behind the ear. I went to the hospital with a loose ear,” he announced on the Brazilians MMA Legends YouTube page.

“Just loose, I was shaking my head like this and the ear was also shaking. This happened around three months before the fight… Until I got home, recovered, and regained the confidence to train grappling it took 4 to 6 weeks.“

“I didn’t do grappling training for that fight. I was like man, I don’t want to grapple it’s crazy. So I did more Muay Thai training, strength, and training to fight the best grappler in UFC history.”

Rafael dos Anjos went on to win the lightweight belt a year later before Nurmagomedov was able to continue his undefeated dominance and become the champion, retiring undefeated and on top.

Regardless of the result of that result, Dos Anjos has recalled just how good Khabib’s ground game actually is.

“If I had trained well, training grappling and all I would have been able to do better, unfortunately, that is what happened.”

Even though Rafael dos Anjos is coming off a fifth-round TKO loss to Rafael Fiziev (12-1 MMA) in July, the Brazilian native is still eager to fight and is still waiting and preparing for his next matchup.

Whom do you think Rafael Dos Anjos should fight next?