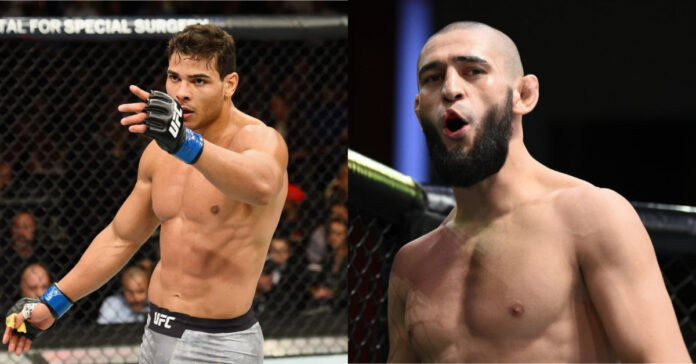 Fan favourite Paulo Costa has claimed that Khamzat Chimaev simply could not handle the pressure he was facing ahead of headlining UFC 279.

In what was Khamzat Chimaev’s first main event slot inside the promotion the stage was set for the Swedish fighter to send Nate Diaz off into free agency and absorb the attention and popularity that a win against such a well-respected veteran in Diaz would bring.

However, things took a dramatic turn for the worse following Chimaev’s extreme weight miss which resulted in the undefeated fighter being dropped from the main event slot and instead tasked with taking on recently rejuvenated welterweight Kevin Holland.

Chimaev would ultimately emerge successful in his matchup when he was able to submit Holland inside the first round and continue his undefeated run inside the promotion. However, amid all the commotion that surrounded UFC 279, it seems Chimaev has lost a large following on his fanbase following his antics.

One man who believes he may know the reasoning behind Chimaev’s weight miss is Brazilian middleweight, Paulo Costa. Speaking to Ariel Helwani on The MMA Hour, Costa has claimed that the Khamzat had been absorbed by the pressure and that the moment had simply become too much for him in his first headlining slot.

“It was crazy – I think he was so disturbed in his mind.”

Despite being one of the most feared fighters to enter the promotion Paulo Costa has welcomed the opportunity to face Khamzat Chimaev after suggestions had been made that ‘Borz’ should make the jump up to compete in a more natural weight class for him, in the 185-pound division.

“I think he should move to 185, to middleweight division, because it’s hard to make 170 for him, on that stage,” Paulo Costa said. “You know, your body changes. It’s never the same. Maybe you change for bad, maybe you change for better, but I think he needs to put a lot of [effort] to make that weight and I think it’s a big problem for him right now. Maybe he cannot do this anymore.”

“I’d like [to fight him] but I don’t really think this will happen because he avoids fighting me,” Costa said. “He doesn’t want to fight me. He just wants to fight small guys, smaller than him, you know? And guys who have no wrestling, have no takedown defense, have no power to f*** him up.

“He knows who I am and even him, his coach, his managers, the guys don’t want that fight. The guys want to fight Kevin Holland, small guys, Gilbert [Burns]. And I appreciate those guys, Gilbert and Holland, but he chooses who he wants to fight.” (Transcribed by MMAFighting)

As he only has one fight remaining on his current contract and it is still unconfirmed whether the Brazilian will be looking to re-sign, Costa could propel his stock to the sky if he were to defeat the undefeated Chimaev before bowing out as a free agent.

Who would you favour in a matchup between Paulo Costa and Khamzat Chimaev?