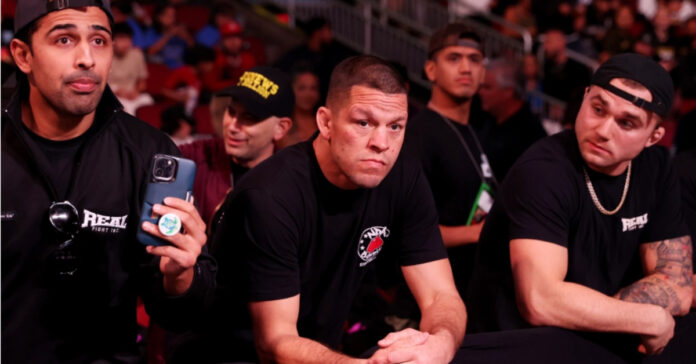 Video footage has emerged of Nick Maximov throwing a beer at one of Jake Paul’s bodyguards during an incident that took place at the Paul vs Anderson Silva boxing event.

Team Diaz was at the event in support of their fellow teammate, Chris Avila, who was competing on the undercard of Paul vs Silva. Diaz’s appearance also increased the speculation surrounding him taking on the ‘Problem Child’ in a boxing match in the future.

Wherever Diaz and his entourage go, carnage always seems to follow, and it appears this event was no different. As the two teams walked past each other backstage it seems words word exchanged which resulted in a scuffle between the two sides.  At the time it was unclear exactly what had happened; however, footage has now emerged from the altercation which shows recently released now former UFC athlete Nick Maximov throwing a beer at one of Paul’s bodyguards.

The footage shows Nate Diaz and Chris Avila shouting at Paul’s bodyguard with both teams going back and forth at each other. Not seen during the footage is Diaz slapping Paul’s meditation coach before Nick Maximov would launch the bottle toward team Paul.

Team Diaz would not remain in the venue following the incident as Jake Paul would go on to defeat former UFC middleweight champion, Anderson Silva, via decision.

Following on from his victory Paul called out Diaz and challenged him to a fight.

“I want Nate Diaz, who’s a b*tch,” Paul said. “He tried to come into my locker room. He tried to cause some sh*t, and then he always leaves the f*cking arena. So Nate Diaz, stop being a b*tch and fight me.” (Transcribed by BJPenn.com)

Diaz has yet to respond to Paul’s call, with the former UFC contender recently finishing his contract with the promotion he would be more than able to accept the call and enter the ring against Jake Paul.

Nick Maximov found himself on the chopping block along with a number of other athletes who have been released by the UFC during this past week. Maximov competed on DWCS before making his official promotional debut at UFC 266, defeating Cody Brundage via unanimous decision. He would follow this victory by then defeating Punahele Soriano via a split decision in February of this year.

Maximov would then drop two back-to-back, firstly a submission defeat to Andre Petroski in May before coming up short against Jacob Malkoun only last month. Diaz’s departure from the promotion has many people wondering whether this affected Maximov’s position within the UFC.

Should Nate Diaz accept the call, would you be interested in seeing him box Jake Paul?