LowKickMMA.com
Home UFC News Nate Diaz is only interested in a fight with The Rock 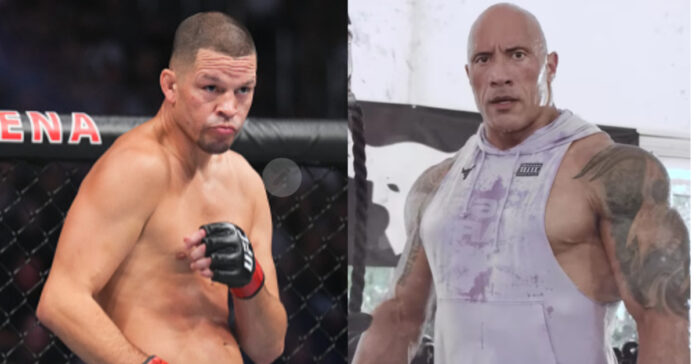 After submitting Tony Ferguson in their UFC 279 main event, Nate Diaz revealed that he is only interested in fighting The Rock.

Of course, Nate Diaz is referring to former professional wrestler turned actor and global superstar, Dwayne ‘The Rock’ Johnson. On September 10th, the Stockton Samurai completed the final bout on his UFC contract with a fourth-round guillotine submission over fellow fan favorite Tony Ferguson. Originally Diaz was scheduled to face undefeated Chechnyan welterweight Khamzat Chimaev until ‘Borz’ stepped on the scale 7.5 pounds over the welterweight limit. As a result, the UFC scrambled to mix-and-match main card fighters in an attempt to save the event.

READ MORE:  Mike Perry reacts to BKFC suggesting he fight Nate Diaz: "Now is my time to make some noise"

Many speculated that Nate Diaz would fight next in his newly established promotion Real Fight Inc. Another strong possibility is that the man from 209 could make his first appearance inside the squared circle against YouTuber turned professional boxer, Jake Paul. However, now it looks like Nate Diaz only has one man on his mind; the ‘jabroni-beating, pie eating, trailblazing, eyebrow-raising step off the break, put your foot on the gas, always ready to whoop some a**, people’s champ, The Rock.’

Nate Diaz is Not a Fan of The Rock’s Shoes

Of course, the desire to fight The Rock is likely just Nate Diaz being Nate Diaz, but the Ultimate Fighter alum did have some words for the ‘People’s Champion’ after being required to wear The Rock’s shoes as part of a sponsorship deal between the UFC and Project Rock, Johnson’s clothing line with Under Armour.

“These shoes f*cking suck! Look at these shoes. They made me put this sh*t on,” said Diaz following an interview with Megan Olivi. “F*ck these shoes!”

While it would be foolish to hold your breath for a showdown between Nate Diaz and The Rock, fans are eagerly awaiting what will come next for the Stockton native following his departure from the UFC after 15 years with the organization.