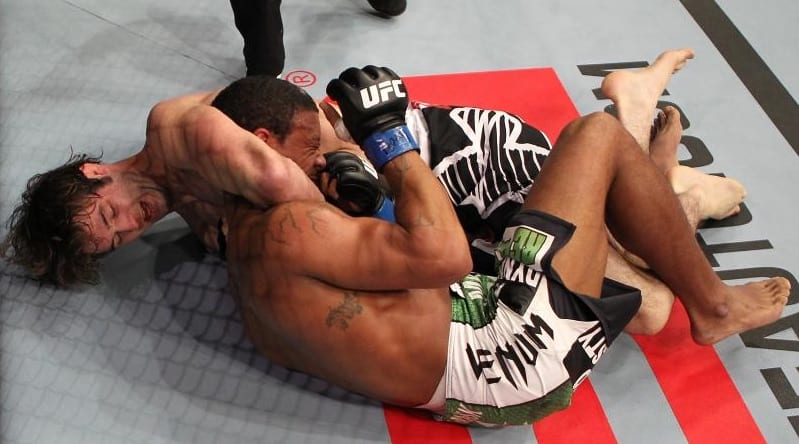 The guillotine choke seems pretty simple enough. You wrap your arm around an opponent’s neck, lock your hands, and strangle.

It’s simplicity is why it is a basic move that is taught to beginners when they’re first starting out. But not only is it seemingly simple to do, but it is also extremely effective. This is why it is a go to move for many grapplers.

You can get a guillotine from nearly every and there are numerous technique variations to learn. Get ready as we let you know everything about the guillotine choke. Below is a detailed history of the move, how to do it, details on various techniques, and tips.

When was the guillotine choke created?

Before Jiu Jitsu the guillotine choke was practiced in Judo and submission wrestling.  In Judo it is called mae hadaka jime that translates to front naked choke opposite the rear naked choke.

For amateur wrestling the guillotine is used more for control and pinning, but submission wrestling uses the choke frequently.

How does a guillotine choke work?

It’s a basic blood choke, where you put pressure on the carotid arteries shutting off blood flow to the brain. Your hands wrap around the opponent’s neck, close your elbows and apply the pressure.

There’s a variety of different guillotine chokes and they’re all really effective. If you do them right, the opponent has one a few seconds to submit or go to sleep.

There’s only a few steps to do the guillotine choke from guard. First if your guard is closed, you’re going to need to open it to do the movements.

Then you sit up, loop one around around your opponent’s neck, and under their chin. Next bring your other hand towards your choke hand and work to get a grip.

For a basic guillotine, grab the wrist of your choke hand. After you establish a grip turn your arm clockwise bringing your elbow into your body to close space.

To finish the choke drop back, turn your hips at a slight angle, and hook a leg over their back. You angle your hips to get the most pressure on the choke and hook your leg to block their defense.

The guillotine is so diverse that you can set it up and finish it all from standing. Your set up to get it will come from when you’re hand fighting with your opponent from standing.

Act like your going for another technique before going for the clinch. This will get them thinking about something else and forget to defend the clinch.

When they’re relaxed snatch their head with a clinch to break their posture. Use that clinch to pass their head under your other arm.

Guillotine from side control

There’s a few different guillotine choke setups from side control, but this is one of the best and easiest. It comes from when the opponent is in side control and attempts to escape.

What they try to do is turn on their side to elbow escape and try to recover guard. When they do this, their neck is exposed for just a moment.

You turn quickly and hook your arm around their neck and grab the wrist of your choke hand. As you go to squeeze, you’re going to drop your hip near the opponent’s head to get the maximum pressure.

A guillotine choke is a great choice from mount and is very tight. Before you go for it remember to watch your base and keep your weight down.

Instinctively, they are going to want to take their arm back. As they do this pass their head to your now free hand and hook under their neck.

Set the grip, arch your back, and squeeze to get the submission.

Arm in guillotines are also a great type of guillotine to know and they’re easy to get. One of the usual ways of getting an arm in guillotine is when an opponent tries to take you down. They are so focused on the takedown that they leave their head exposed.

As the opponent comes in to grab you take your grips. The arm that goes around the arm grabs the wrist of your choke hand just like a normal guillotine choke.

Now that you have your grips, there are 3 specific details to be successful at the arm in guillotine. First is to control their arm by pushing it close to their body with your arm. This prevents them from being able to defend.

The next two details are to bend their neck down and turn your lat into them. Doing these will insure the choke is tight as you fall back into guard and finish it.

Probably one of the tightest guillotines and hardest to defend is the high elbow guillotine. This is the counter to a defense against a normal guillotine.

In a normal guillotine choke, the opponent can prevent you from locking your grip. With a high elbow guillotine you bypass the opponent’s defense by going over their arm.

As you’re controlling their head with one arm you bring the other arm between their shoulder and neck Bypassing their arm to get a really tight grip to finish the choke.

For most guillotine chokes you need two arms to perform the choke. But if your arm is deep enough and you stay tight a one arm guillotine is very possible and effective.

One of the most common places to hit the one arm guillotine is from mount. Luke Rockhold and Nate Diaz have hit this type of choke before in fights.

When you’re in mount base both hands out to one side of your opponent. Keep one arm there to block a reversal attempt as the other moves toward their neck.

As you hook your arm under the opponent’s neck loop it deep towards their arm before going around the neck.  At the same time you walk your other hand basing more towards the centerline.

Hook your arm under the opponent’s chin and place your hand on your chest to ensure it’s tight. Arch your back as you bend their neck and start the squeeze to get the submission.

Tips for doing a guillotine choke

As you read, there are a variety of different guillotine chokes, but details for the choke are about the same. Remember all of these tips if you want to have more success with your guillotine chokes.