LowKickMMA.com
Home UFC News Nate Diaz willing to box Jake Paul: ‘For sure one of the... 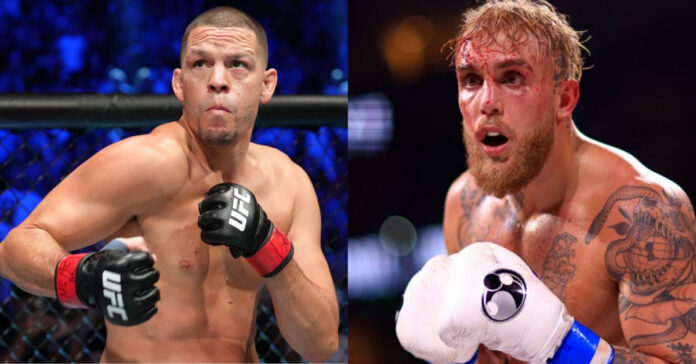 Nate Diaz is down to take on Jake Paul in a crossover boxing match.

Diaz fought out his contract when he scored an impressive win over Tony Ferguson at UFC 279. He is now a free agent and can compete outside of the UFC, making a potential showdown with YouTube sensation turned boxer Paul look like a viable option.

Diaz expressed his willingness to compete with Paul after the latter’s upcoming fight with mixed martial arts legend Anderson Silva on Oct. 29.

“(Jake Paul) is for sure one of the options,” Diaz told iD Boxing. “He’s doing big stuff. He’s doing big things. He’s got a big fight ahead of him. If he wins that, I’m sure people will be really impressed by it. And if Anderson (Silva) does his thing on him, that’s impressive also. Now we’ve got a fight on his hands. I’m looking forward to it.” (ht MMA Junkie)

Diaz wants to get into boxing

Having served 15 years in the promotion, the Stockton native made a name for himself in MMA. However, Diaz talked about how he did not necessarily intend to get into the sport and found himself in that position due to a lack of boxing shows around his area.

“From 17 or 18 years old, I was starting to fight, I was boxing with my boxing coach,” Diaz said. “There were boxers all over my gym, and I was going to box initially, but MMA shows were more around my area, and they were happening, so I got stuck in MMA. I got stuck in a cage this whole time with contracts and stuff. Now everything is open for the taking. I never stopped training for a boxing fight since I started fighting. When the right opponent or right thing comes, we’re going to take it.”