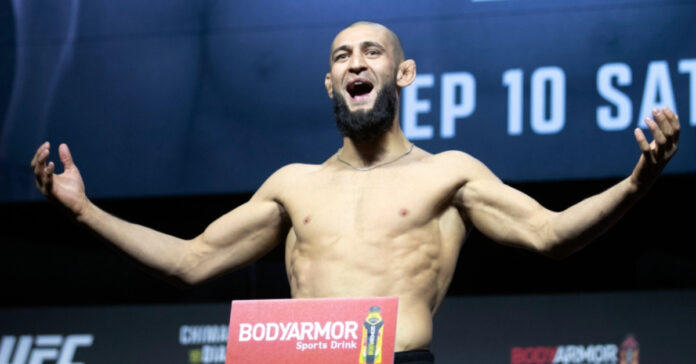 Ahead of his UFC 279 co-headliner earlier this month, footage has emerged of undefeated welterweight contender, Khamzat Chimaev hyping himself up for his Octagon walk against Kevin Holland, taking inspiration from former heavyweight boxing world champions, the late, Muhammad Ali, and Mike Tyson.

Chimaev, who improved to 12-0 as a professional earlier this month at UFC 279, defeated welterweight striker, Kevin Holland with a first round D’Arce choke submission in the opening minute of their short-notice pairing.

The AllStars MMA staple was initially scheduled to share the Octagon with the exiting, Nate Diaz atop the card in Las Vegas, Nevada, however, Chimaev tipped the welterweight non-title limit by seven and a half pounds.

Turning in another dominant Octagon performance, Chimaev, who had scored a close, unanimous decision win over former title challenger, Gilbert Burns earlier this year, managed to score an early takedown on Holland, controlled the Californian before wrapping up a D’Arce choke submission win.

Criticized for his weight mishap throughout the days following UFC 279, footage has now emerged detailing Chimaev hyping himself up for his Octagon walk backstage at the T-Mobile Arena in ‘Sin City’ – taking inspiration from the aforenoted, Ali, and Tyson.

Linked with a potential middleweight move off the back of his weight miss and win against Holland, Chimaev has been the subject of a call-out from one-time title challenger, Paulo Costa, who offered to face the Chechen at UFC 283 in January in his native Brazil.

Footage previously emerged during UFC 279 fight week detailing a verbal altercation between both Chimaev and Costa at the UFC Performance Institute in Las Vegas, Nevada.