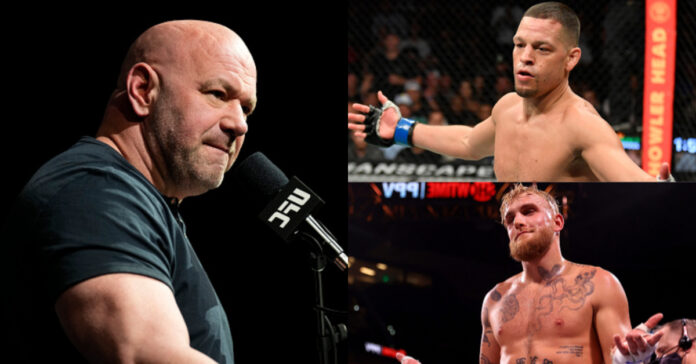 After months of lobbying for a fight, Nate Diaz has finally been given a date for his final walk to the UFC Octagon.

On September 10th, the Stockton native will compete in the final fight of his contract when he faces fast-rising welterweight star Khamzat Chimaev at UFC 279. The two will be the featured bout of the evening, competing in a five-round non-title main event. Following the contest, Nate Diaz will become a free agent for the first time in 15 years.

The Ultimate Fighter alumni showed a strong interest in exploring free agency following the completion of his UFC contract. Despite a recent skid that has seen him dropping three of his last four and fighting on a fairly limited basis with long stretches of inactivity in between bouts, Diaz remains one of the most popular and polarizing names in combat sports. As a result, everyone seems interested in getting into the Nate Diaz business, including former YouTube star turned professional boxer, Jake Paul.

Paul has lobbied for a showdown with Diaz in the squared circle, but according to UFC president Dana White, that may not be in the cards.

Where Will Nate Diaz Land Following His UFC 279 Main Event?

With so many possibilities, it’s hard to say where Nate Diaz will land following his exit from the UFC in September. It’s clear Diaz is not interested in being tied down to any one organization. Luckily for Diaz, most promotions outside of the UFC have allowed their contracted fighters to pursue other interests. Bellator could be a potential landing spot, but the promotion has started to outgrow the practice of signing every UFC fighter whose contract expires.

Bare Knuckle Fighting Championship would make a lot of sense and one that the promotion is open to according to BKFC president David Feldman. While speaking to MMA Junkie Radio, Feldman expressed an interest in being in the “Nate Diaz business” pending the outcome of his UFC 279 bout with Chimaev.

“The one thing I always want to worry about is that these fighters should still be fighting and not saying he definitely should be fighting. But after a tough fight like that, does he want to continue fighting? Is his heart in it? Is his body still in it, and is he ready to do it? If those answers are yes, 100 percent we would be in the Nate Diaz business, a hundred percent.”

As for the possibility of Nate Diaz squaring off with Jake Paul in the squared circle, never say never. Sure, Diaz may have downplayed the possibility when speaking to his current boss, but given the amount of money that could be generated from a Paul vs. Diaz main evented pay-per-view, the Stockton star could change his tune.