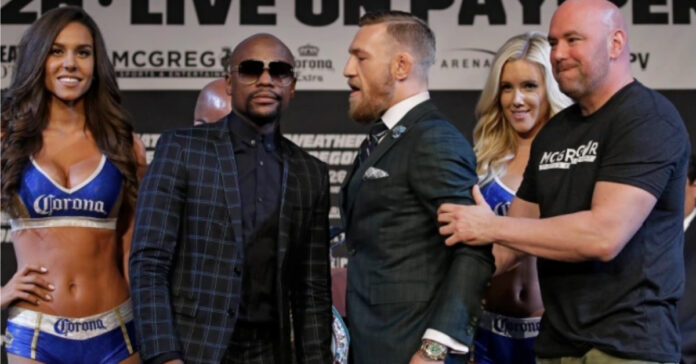 Back in 2017, Mayweather, a former multiple-time and weight boxing world champion, made his final professional boxing appearance, facing then undisputed lightweight and featherweight UFC champion, Conor McGregor in Las Vegas.

Making his professional boxing debut in a high-profile matchup against the Michigan puncher, Crumlin native, McGregor suffered an eventual tenth round standing TKO loss to Mayweather – as the pair scooped lucrative paydays in the process.

In the time since, however, both have been linked with a subsequent rematch in the future. And fuel has been added to the fire, with outlet, the Daily Mirror reporting how a rematch between the two was currently in the works, as the pair “argue” over terms, ruleset, and the number of rounds in which to compete under.

However, the aforenoted, UFC leader, White, has firmly dismissed talks of a re-run between Mayweather, and McGregor – confirming that the outlets report is “total bullsh*t”.

“All bullsh*t,” Dana White told assembled media following Dana White’s Contender Series. “Those guys (Floyd Mayweather and Conor McGregor) are just talking on social media like they do. The Daily Mirror, or whatever the hell that tabloid is called, is full of the sh*t.”

When then asked what would lead White to discuss a rematch between Mayweather and McGregor, the promotional leader replied, “dementia”.

Set for a return to the squared circle before the close of the year in another exhibition boxing match, Mayweather competed in a trio of exhibition showcases against Tenshin Nasukawa, Logan Paul, and recently, Don Moore since his retirement.

Conor McGregor has yet to compete since July of last year

As for McGregor, the recently turned 34-year-old has been sidelined for a year since suffering a fracture of his left tibia in his UFC 264 headliner against Dustin Poirier – resulting in a doctor’s stoppage TKO loss. The former duel-weight champion is, however, expected to return to the Octagon at the beginning of next year, if not before the close of 2022.