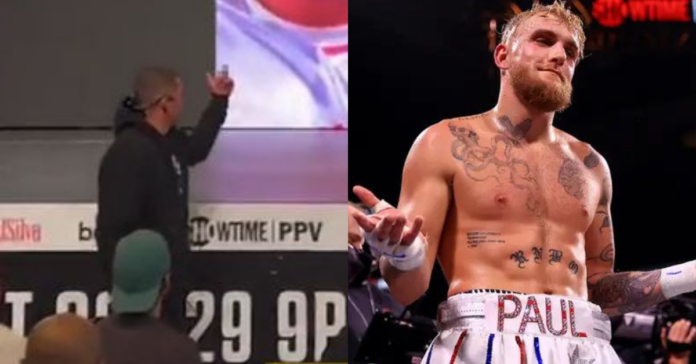 Nate Diaz, now retired from the UFC, wants a piece of Jake Paul. ‘The Problem Child’ will be fighting Anderson Silva on October 29, and the Stockton California Diaz will be ringside for the bout.

During the weigh-in ceremony, the 39-year-old Diaz was photographed showing Jake Paul his middle finger.

Nate Diaz was in talks to be fighting Jake Paul this summer. However, still being under contract with the UFC, Diaz was unable to participate. After his UFC 279 win, he successfully fought out his contract and is now a free agent.

Nate Diaz recently discussed various options ahead of him, one of them being a boxing showdown against YouTuber and pro boxer Jake Paul. While speaking to iD Boxing, he explained:

“Jake is for sure one of the options, he’s doing big stuff, he’s doing really big things and he’s got a big fight ahead of him and if he wins that I think people should surely be really impressed by it. And if Anderson does his thing to him that’s impressive also so we’ve got a fight on our hands and I’m looking forward to it. It’s 50-50, we’ll see what happens.”

While speaking to ESPN, Jake Paul said that there may be a few details to sort out first however he does want the Diaz fight. In September of this year, he said:

“We will see I think there is a lot of hurdles that he has to get through. Even getting out of his contract probably I don’t know all the details but then I also have to get through some hurdles. First of all I will focus on October 29 but I do want that fight.”

This weekend, Jake Paul will be facing off against the all-time MMA great Anderson Silva. ‘The Spider’ is known for his knockout power and went 2-0 in professional boxing in 2021. With wins over Tyron Woodley and Ben Askren, Brazil’s Silva will be the biggest challenge of Paul’s career.