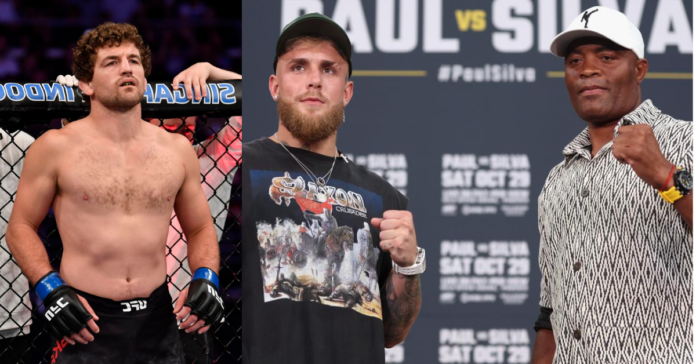 Ben Askren shared his thoughts on the Anderson Silva vs Jake Paul boxing match scheduled for this weekend. ‘Funky’ has experience against ‘The Problem Child’ having been knocked out in their meeting in 2021.

Anderson Silva is an all-time great in MMA. Brazil’s ‘The Spider’ was the long-reigning middleweight champion in the UFC. He has since retired from the cage and entered the boxing ring. With wins over Julio César Chávez Jr. and Tito Ortiz, Silva will be entering his bout against Paul 2-0 in 2021.

Jake Paul is a perfect 5-0 in professional boxing with notable wins over Tyron Woodley and Ben Askren. ‘The Problem Child’ beat both of these men by way of knockout.

In an interview with talkSPORT, the former ONE and Bellator champion explained:

“I don’t really care that much. I don’t think I’m even going to buy the pay-per-view. I think it’s probably unlikely. I have no idea what to expect in this one, I guess we’ll see on Saturday.”

“I was really disappointed when Tyron lost. As far as it looks on me, it actually looks alright because Jake Paul is significantly better than we thought he would be. Part of me would like to see him [Jake Paul] get beat up. But if he does well it’s like, ‘Okay, I was clearly out of my league when I said yes.’ So, the expectation of me goes lower, which is fine.”

On the 29th of October, Jake Paul will face the biggest test of his career as he faces a highly experienced knockout striker in ‘The Spider’ Anderson Silva.