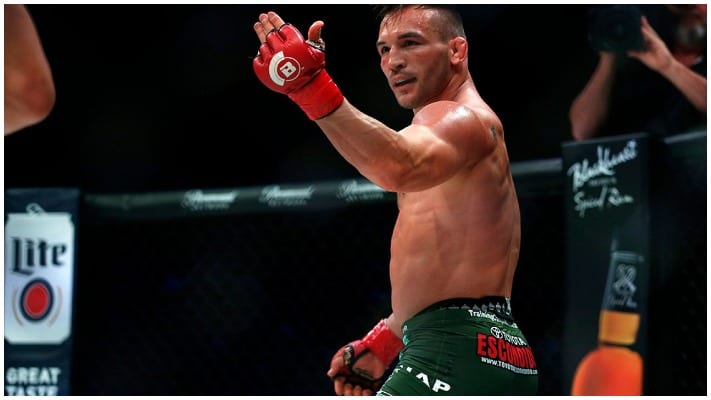 Recent UFC signee Michael Chandler has let it be known he wants to waste no time getting a title shot, and he’s come up with an innovative way to get one.

The former Bellator MMA star signed with the UFC in September, and was immediately thrown into the lightweight title picture. Chandler even made the 155-pound weight limit to serve as an alternate for the title fight between Khabib Nurmagomedov and Justin Gaethje at UFC 254. Ultimately, his services weren’t needed and Nurmagomedov would go on to submit Gaethje in the second round. Following the win, Nurmagomedov would announce his retirement, which has thrown the division into a state of flux.

In an interview with BT Sport, Chandler offered his own idea to give some clarity to the crowded division (H/T MMA Mania).

“Let’s be honest, I’m the new guy, I’m not going to come in and say, ‘Hey guys, I deserve a title shot,’” the former Bellator champ Chandler told BT Sport. “I’d love my name to be thrown into the mix. I’d love the opportunity to fight in a four man tournament for that title. There’s all sorts of different things the UFC could do, this is the biggest martial arts sports promotion in the world and I’m excited to be a part of it.

“But Conor, Poirier, myself, Ferguson,” he continued. “There’s some names that need to be fighting for a title so let’s make it happen.”

All four men Chandler mentioned have a legitimate claim to a title opportunity. Once thought of as the face of Bellator MMA, Chandler’s stock has arguably never been higher as he has won nine of his past eleven fights and is coming off a first round knockout of Benson Henderson. Poirier rebounded off a loss to Nurmagomedov with a decision win over Dan Hooker in a “Fight of the Year” contender; McGregor is the UFC’s biggest star and coming off a first round knockout over Donald Cerrone, and, though he is coming off a loss, Ferguson had previously been on a 12-fight winning streak with wins over some of the divisions biggest names.

Poirier and McGregor are already scheduled to face each other on January 23. With the rest of the fight card still relatively bare, the UFC could theoretically add Chandler vs Ferguson as the co-main event. A couple of other men with with title aspirations – recent title challenger Gaethje and owner of an eight-fight win streak, Charles Oliveira – could also face off in an alternate fight.

The UFC has been open to hosting title tournaments before. Demetrious Johnson was awarded the inaugural flyweight championship after winning a similar tournament.

Do you like Michael Chandler’s idea of a lightweight title tournament? Let us know!