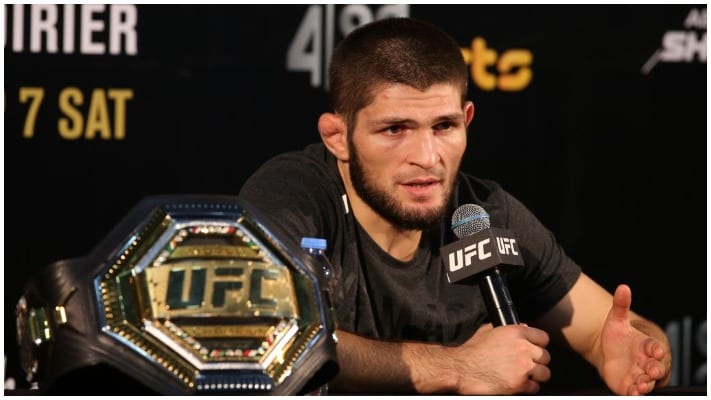 One of the greatest to ever put on the gloves and step into the octagon, Khabib Nurmagomedov has announced his retirement.

Nurmagomedov made the announcement following his second round submission victory over Justin Gaethje. Immediately after the win, Nurmagomedov crashed down to the mat as a sea of emotions washed over him. The fight against Gaethje marked the first time Khabib had fought since the passing of his father, who also served as his head coach. After taking a moment to regroup, Nurmagomedov proceeded to his in cage interview with Jon Anik.

Nurmagomedov’s cornermen were already in the process of removing his gloves before he could deliver the news (H/T MMA Fighting).

“Today I want to say this was my last fight,” Nurmagomedov announced. “No way I’m going to come here without my father. It was first time after what happened with my father, when UFC called me about Justin, I talk with my mother three days. She doesn’t want me to go fight without my father but I promised her it was going to be my last fight.

“If I give my word, I have to follow this. It was my last fight here.”

The victory over Gaethje pushed Nurmagomedov’s record to 29-0. Coming into the fight, Khabib and his team had long made it clear that their goal was to retire at 30-0. Ultimately, he decided to retire one win short of the record in honour of his late father.

Nurmagomedov leaves the UFC with a perfect 13-0 record in the organization and their lightweight championship still wrapped around his waist. He had one last request of the UFC before he leaves for good.

“Only one thing what I want from UFC — Tuesday, you guys have to put me No. 1 pound-for-pound fighter in the world because I deserve this,” Nurmagomedov said.

Leaving the sport with an undefeated record all but guarantees he will have his name at the top of the list. The real question will be where his name ranks on the list all-time.

Do you think Khabib Nurmagomedov is the greatest fighter ever? Let us know!