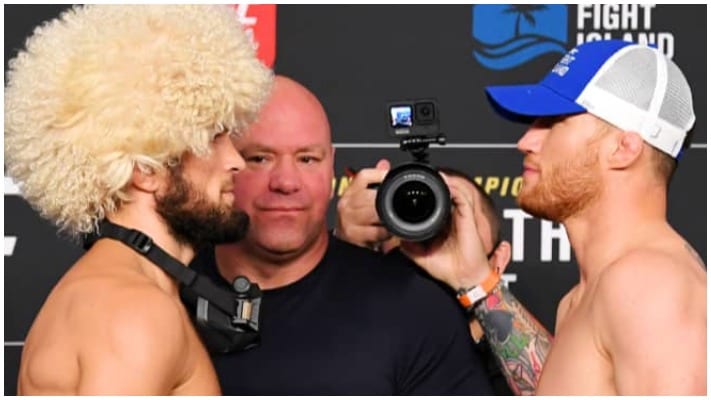 IT’S TIME! The UFC 254 main event is finally upon us. Khabib Nurmagomedov will attempt to unify the lightweight time for a second time in as many fights. Interim titleholder Justin Gaethje is the man that stands in his way. Who’ll win? Let’s find out…

Round 1: After 30 seconds of a stand off Justin Gaethje lands a low leg kick, the first strike of the fight. After another long break in the action he misses with another kick. Both men start swinging wildly. Nothing seems to land cleanly. Nurmagomedov shoots for the takedown. Gaethje is able to defend various attempts from the Russian standout. The pace is really starting to pick up now. Nurmagomedov tries a flying knee! Gaethje lands a huge uppercut. Nurmagomedov eats it well. The Russian eventually secures a takedown. He quickly moves into the mount position and is cranking for the armbar as round one ends.

Round 2: Nurmagomedov lands a big leg kick followed by a hook upstairs to start round two. ‘The Highlight’ scores with a left land upstairs. Gaethje lands two low leg kicks. Nurmagomedov grabs the leg and secures the takedown. He quickly takes the mounts again and locks up a triangle choke. Gaethje is tapping but the referee doesn’t step in and he goes to sleep.