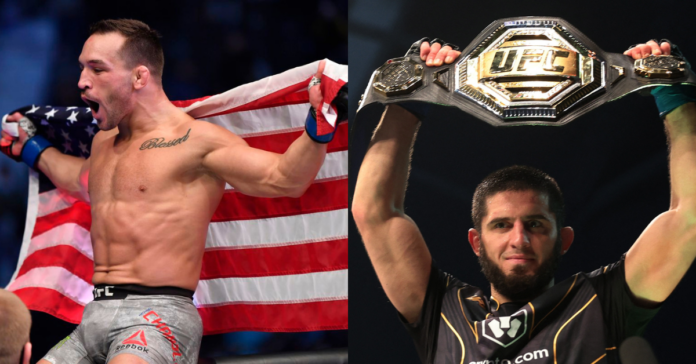 ‘Iron’ Michael Chandler believes he has the chops to take on the reigning light world champion Islam Makhachev. Before Chandler can put himself in the UFC title picture, he first needs to defeat Dustin Poirier this weekend at UFC 281.

In an interview with Daniel Cormier and Ryan Clark on ESPN, the 36-year-old US-born athlete explained that Dagestan’s Makhachev should be worried about him. Michael Chandler declared:

“That’s one of the beautiful things about coming to the UFC as a 34-year-old seasoned veteran… What I have accrued in experience and maturity over the last 14 years of fighting is invaluable. Honestly, I love it. I want Islam to talk about me. I want to talk about Islam… I have the best wrestling. Good old fashioned passionate American D1 wrestling and I do believe that I can shut down Islam and I can beat him.” [Transcript courtesy of Sportskeeda]

The American athlete had over 100 wrestling wins when he was active as an NCAA Division I competitor. Chandler would later switch to MMA and become a Bellator lightweight world champion. With merely four fights in the UFC, he has earned a reputation for being one of the most exciting fighters currently in the sport.

See the full interview below:

Michael Chandler and the title picture at lightweight

In a near-flawless performance at UFC 280, Islam Makhachev was able to earn the lightweight throne against Charles Oliveira with a second-round submission. This extends Makhachev’s unbeaten streak to 11 in a row.

Most recently, Chandler is coming off a thunderous front-kick knockout of Tony Ferguson at UFC 274. With a win against the top-ranked Poirier this weekend, Michael Chandler is hoping to put himself in the title picture conversation.

Islam Makhachev may be booked, though, as he has verbally agreed to take on the featherweight king Alexander Volkanosvki in 2023.