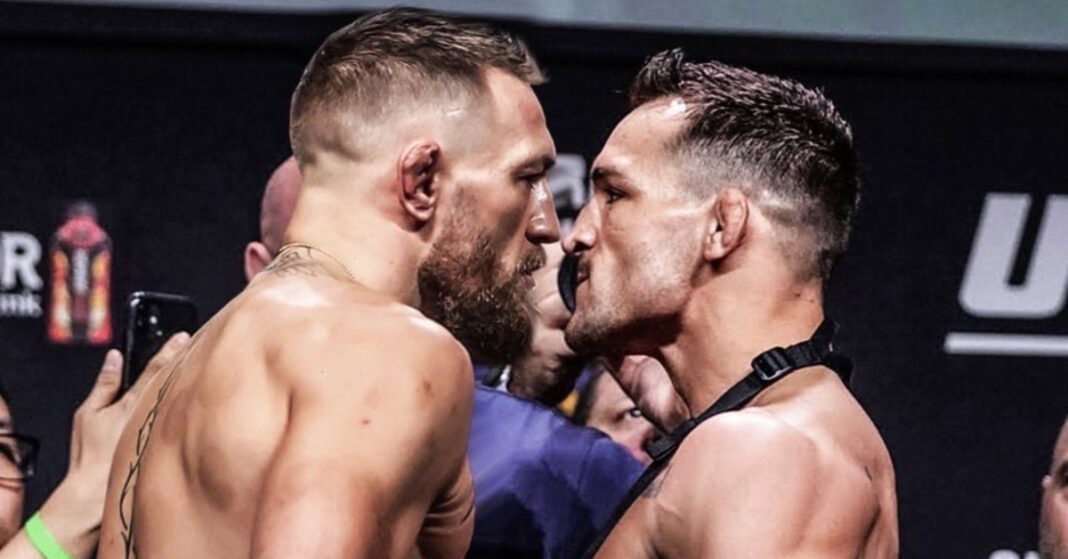 Tasked with bringing an end to a two-fight losing skid following UFC 268 last weekend — Michael Chandler has sights firmly planted on welcoming former two-weight champion, Conor McGregor back to the Octagon next year — with the Dubliner sharing the same sentiment it appears.

Chandler, who opened the main card of UFC 268 on Saturday — turned in a Fight of the Year contender against former interim lightweight titleholder, Justin Gaethje, eventually suffering a unanimous decision loss to the Trevor Wittman student.

The defeat came as Chandler’s second consecutively since his move from Bellator — where he clinched undisputed lightweight gold on three separate occasions.

In his promotional bow earlier this year, Chandler made a massive splash — stopping recent UFC 267 feature, Dan Hooker with an explosive first round knockout victory. The win catapulted Chandler into a May vacant lightweight title challenge against Charles Oliveira — who stopped him with a second round rallying knockout effort.

The January debut came beneath a lightweight rematch between McGregor and former interim titleholder, Dustin Poirier, where the Dubliner suffered the first knockout loss of his professional mixed martial arts career — before he would find himself on the receiving end of a July doctor’s stoppage TKO loss to Poirier after suffering a first round fracture of his left tibia.

In his time away from the Octagon, McGregor has been limited in regards to his ability to train whilst he recovers from his surgical procedure to address his leg injury. And is slated to feature in a charity wheelchair boxing match next month in his native Ireland.

Posting on his official Twitter account following his defeat to Gaethje — Chandler shared a fanmade picture of himself and the aforenoted, McGregor in a face-off, paired with the caption, “2022“.

In response to Chandler, McGregor praised his performance against Arizona native Gaethje on Saturday at Madison Square Garden, as well as maintaining his interest in eventually meeting with the Missouri native.

“I’m down at some stage for sure,” McGregor tweeted. “Great fight the other night Mike [Michael Chandler], congrats!“

Replying to McGregor soon thereafter, Chandler thanked McGregor for his praise, as well as claiming he would be seeing him in the not too distant future.

“Thank you sir,” Chandler tweeted. “It would be my pleasure. See you soon.“