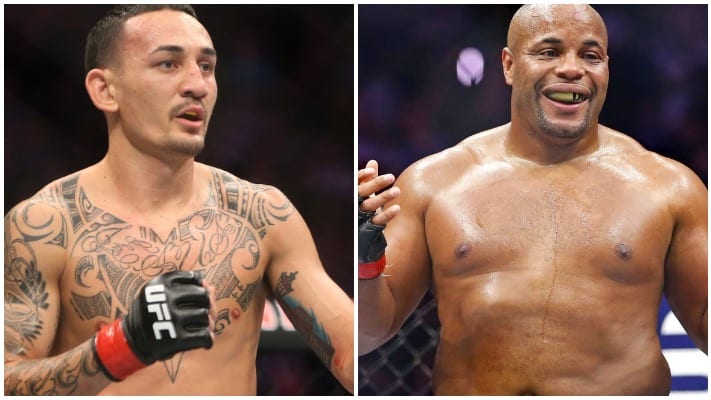 Former featherweight champion Max Holloway guested on Joe Rogan’s podcast earlier this week. Holloway was in good spirits despite being fresh off losing his title to Alexander Volkanovski at UFC 245.

The conversation eventually came around to Holloway’s weight between fights and exactly how high he might get. Despite being hesitant the featherweight legend confessed.(H/T The JRE MMA Show) “If I have to guess, probably 180. 185 is probably the heaviest.”

Joe Rogan joked. “So that means 190, maybe even 200lbs.” Before Holloway continued. “Maybe even 210. You really think I’m putting on an act calling out DC (Daniel Cormier).”

After his last title defence against Frankie Edgar, Holloway said he’d fight Cormier at heavyweight next week. He’s now gone one step further by issuing an epic and truly hilarious public call out to the former heavyweight king.

“DC! You are eating everything I want to eat. You know who the real money fight is DC, it’s me! I’ll fight your ass and then battle you in a all you can eat buffet, you let me know. Daddest man on the planet right here”

Away from the jokes. Holloway reflected on the recent loss of his long-held featherweight crown. “Of all of my title fights this is the least damage I’ve taken, and I lost my damn belt.”

“I know he was landing leg kicks and some where power but a bunch of other ones I didn’t know where landing to that extent. Then again, this is not a street fight. It’s a game and he outpointed me in the game, so you know good for him.”

When Rogan asked if he’d be chasing an immediate rematch, Holloway said he would even if it meant travelling around the world to get it.

Check out Max Holloway’s epic call out of Daniel Cormier below (39:22)