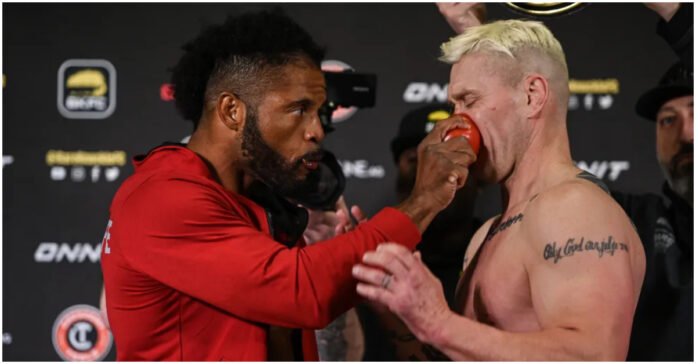 Lorenzo Hunt came in with a surprise at the BKFC 24 ceremonial faceoffs when he smashed a half-eaten tomato in Joe Riggs’s face.

As an MMA fan, it’s not only the actual fight that gets us excited. It’s the thrill of the build-up as two opponents get ready to face each other in the cage. Weigh-ins, faceoffs, and press conferences are great ways for an athlete to promote their fight and increase the standing of their brand.

Ahead of the fight, light heavyweight champion Lorenzo Hunt found his opportunity to promote the event at the BKFC 24 ceremonial faceoffs. Squaring off against former UFC fighter and next title challenger Joe Riggs, Hunt came in with a robust weapon in his hand, a tomato.

Hunt walked up and began to nibble away at the plant before he smacked the half-eaten tomato right in Riggs’s face.

Props to the security and staff working the show for acting quickly. They separated the two fighters before the matter could escalate. Riggs was far from delighted with the strike as he yelled out “c*nt” in Hunt’s direction. The 39-year-old took joy in the exploits of his antics as he laughed at a distance from Riggs and put on a show for the audience.

Lorenzo Hunt is going into his contest off a five-fight win streak that saw him dispatch Hector Lombard and Josh Dyer in bare-knuckle boxing matches. ‘The Juggernaut’ has become a provocative figure in the promotion who’s infamous for trashing his opponents.

Before his match with Lombard, Hunt walked up to the former champion and took his belt away as security made sure to maintain a distance between them. He proceeded to smash the belt on the floor prior to walking away with it.

After Lombard’s successful defense against Riggs, he was unable to complete his post-fight interview in the ring. Hunt took the chance to jump in and aggressively paced towards the former cruiserweight king who was having none of it. Being already infuriated with his actions from the presser, Lombard didn’t hesitate to take a swing at Hunt as he invaded his personal space.

Do you think Lorenzo Hunt will beat Joe Riggs tonight?