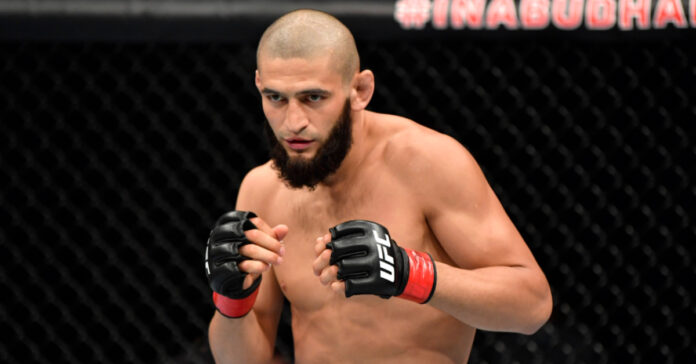 The undefeated contender, Khamzat Chimaev, has taken to social media to announce what appears to be confirmation of his move up to the middleweight division.

Following on from the fallout which occurred at UFC 279 speculation surrounded whether Khamzat Chimaev was able to consistently make the cut to compete in the welterweight division. His botched weight cut resulted in a card reshuffle and him losing out on his main event slot against the then departing Nate Diaz.

It now seems that this issue may not be of concern anymore as Chimaev posted on social media all but confirming an entry into the 185-pound division.

Given the need for new title challengers within the division this seems to be a smart decision made by Chimaev, and who is to say that he could not return to the welterweight division later in his career?

Potential fights to make for Khamzat Chimaev at middleweight

If Khamzat Chimaev is looking to make the middleweight division his new home, who should be the first person to welcome him to the division? Let us look.

READ MORE:  Dana White reveals which fighters scare him the most: "He looks like a stone-cold f*cking killer."

An obvious match to make would be against none other than Paulo Costa. One of the elite competitors within the division and given the two men have already had an exchange both on social media and during fight week ahead of UFC 279 a matchup between this pair would be highly anticipated.

Another route for Chimaev to earn himself a shot at the champion in his new division could be through Robert Whittaker. Despite showing a disinterest against facing ‘The Reaper’ having preferred to train with him, taking out the clearly well-established number one contender in the division would all but guarantee Chimaev a shot at the belt.

While both matchups would make sense for him, what is to say he will not be thrown straight into the title picture? If Israel Adesanya can defeat Alex Pereira at UFC 281 the champion will be in desperate need of new challenges and stylistically Chimaev may possess all the tools necessary to give him his toughest test to date.

Who would you like to see Chimaev face in his middleweight debut?