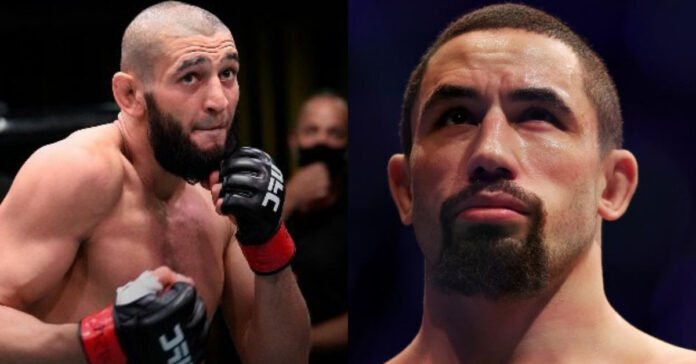 Khamzat Chimaev is not interested in taking on Robert Whittaker.

The rising top-ranked welterweight prospect recently got into an altercation with Paulo Costa at the UFC Performance Institute. He was scheduled to headline UFC 279 against Nate Diaz in a 170-pound bout but got paired up with Kevin Holland after he came in seven and a half pounds over the agreed weight limit.

Khamzat Chimaev does not want to fight Robert Whittaker

Dana White talked about the potential of “Borz” moving up to middleweight in the future. Chimaev was asked about the idea of competing against former 185-pound champion Robert Whittaker. He explained why he was not interested in the matchup.

White wants Chimaev to move up

Considering the huge gap Chimaev missed the mark by, his future in the welterweight division looked uncertain. White gave his take on the matter, suggesting a move up to middleweight for “Borz.”

“It’s a problem,” White said (h/t MMAFighting). “That’s a problem that he missed weight. I don’t know. We’ve got to look at it and figure it out. What makes sense is for him to fight at [185 pounds], so we’ll see. “It is what it is. It happened. We’ll go back this week and come up with a plan and probably have him fight at [185]. After he just didn’t make weight, I don’t know,” White said when addressing Chimaev’s future. “There’s a lot of possibilities for him. Possibly at 170 or at 185.”