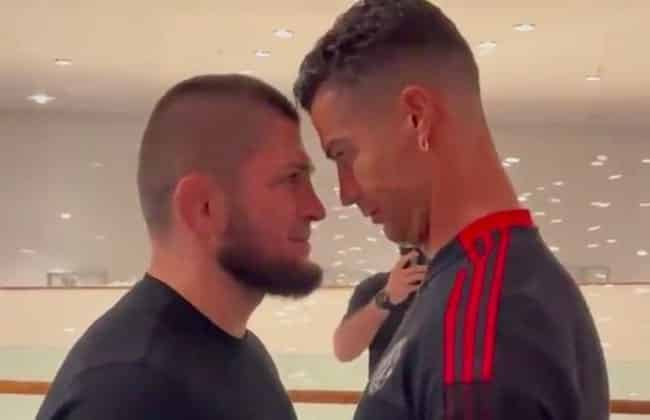 Former undisputed UFC lightweight champion, Khabib Nurmagomedov attended Manchester United vs. Everton last weekend at Old Trafford as part of his trip to Britain on a promotional tour, with footage emerging of the retired Dagestani grappling engaging in a face-off with Portugal and United forward, Cristiano Ronaldo.

Khabib, who announced his retirement from professional mixed martial arts back in October of last year following his successful lightweight title unification win against former interim champion, Justin Gaethje, citing the passing of his father, Abdulmanap Nurmagomedov as the reason he would be hanging up his gloves.

In March of this year, Khabib officially vacated his undisputed lightweight title, despite constant and transparent attempts from UFC president, Dana White, and promotional officials to entice Khabib to make one final Octagon walk.

In the summer, Khabib claimed that the aforenoted, Ronaldo had told him that he would be completing a return to Manchester United from Italian giants, Juventus, prior to the completion of the shocking move — with the 36-year-old also linked with a stunning transfer to city rival’s Manchester City.

Meeting with Cristiano Ronaldo at Manchester United’s Carrington training ground, Khabib engaged in a face-off with the Portugal international, as well as took multiple pictures — a couple of which appear to show Ronaldo attempting a single-leg takedown on the undefeated mixed martial artist.

For Ronaldo, the five-time FIFA Ballon d’Or winner completed a shock move back to Manchester United in August for a reported initial fee of £12.85 million transfer from Juventus — penning a two-year contract with the Manchester club.

In his second debut for United, Ronaldo netted twice in a 4-1 victory over Newcastle United, and has since scored against West Ham United, BSC Young Boys, and the aforenoted, Villarreal from six total appearances.

Khabib retired from professional mixed martial arts with an undefeated 29-0 record, successfully defending the UFC lightweight title in submission wins over the trio of former champions, Conor McGregor, Dustin Poirier, and the above mentioned, Gaethje.